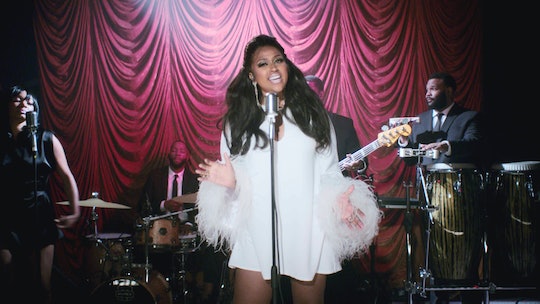 Jazmine Sullivan's Parents Will Join Her For Super Bowl LV

R&B artist Jazmine Sullivan loves two things: her music and her family. Truly, Jazmine Sullivan's parents and family have always been her biggest supporters throughout her career. In fact, the "Heaux Tales" singer will bring her parents with her when she performs the national anthem at Super Bowl LV this Sunday in Tampa, Florida, alongside country singer Eric Church.

"My mom and my dad are going to go with me. This is a moment for all of us. They have supported me in this industry for so long," 12-time Grammy nominee told The Associated Press. "The fact that I’m able to be on the biggest stage you can be on — this is an amazing thing to experience with them." Sullivan's parents will also have a front row seat when H.E.R. sings "America the Beautiful" and The Weeknd headlines the Pepsi Halftime Show.

Ahead of the Super Bowl, Sullivan penned a touching tribute to her parents on her Instagram Story for always supporting her. "Man just grateful for my parents watering the gift they seen in me as a kid," she wrote on Friday. "Parents if u see something special ur child, or they show interest in something PLEASE show them you believe in them. That could be the difference between success and failure."

As Sullivan prepares the wow the nation with her vocal cords on the field in Tampa, let's get to know who's been in her corner from the beginning.

Her Mom Is A Breast Cancer Survivor

Sullivan's mother Pam was diagnosed with breast cancer in 2019, a time in which the Philly native said her "family's world was flipped upside-down" in an Instagram post.

During her treatment, the singer went on a vegan diet and lost over 50 lbs. to support her, according to The Beet. About one month before the Super Bowl, on Jan. 10, Sullivan announced on Twitter that her mother was completing her last round of chemotherapy, calling the moment "a huge milestone."

"Today is my moms final day of chemo! This is a huge milestone!" she tweeted. "Of all the blessings that are pouring in rt now... that is the only thing that matters to me!! I’m in tears and in awe of God’s grace n mercy! Anyone going thru breast cancer please know I’m praying for u!"

Her Mom Was A Playwright

Sullivan's Heaux Tales album was partly inspired by her upbringing and her mother's own creative career. Sullivan's mother was also a backup singer for Philadelphia International Record and wrote plays, according to the Los Angeles Times.

"I’m like a Disney kid. When I was growing up, my mom was a playwright. When I write, I see it almost in pictures, like a full production. I went home and brainstormed, and Heaux Tales came up," she shared in an interview with Vulture. "I thought about the conversations I have with my girlfriends, my mom, different people like that."

Her Mom's Love Of Jazz Inspired Her Name

"I named her Jazmine because of my love for jazz. So I knew that she was going to have some kind of talent," Sullivan's mom revealed in a 2016 video for Reebok Classics.

Music and art runs so deep in Sullivan's family that her mom got her enrolled in a performing arts high school, Capa High School in Philadelphia, the singer shared in the same video.

Her Father Worked At A Museum

Sullivan's father Don was a tour guide and curator for Philadelphia’s Strawberry Mansion, a historic house museum originally built in 1789. And, according to The Guardian, she lived there as a kid with her parents and two brothers, too.

"It was an interesting process we went through as kids,” she told the publication. "Where we actually lived was on the third floor, pretty much all the way up in the attic — where the slaves lived. Whenever my dad was doing tours we kind of had to retreat, and we pretty much only came down to eat. And usually the people on the tours were, you know, white people. And we had to hide and retreat up to the slave quarters!"

Of course, Sullivan's dad is also a music lover. "My dad loves Stevie Wonder," Sullivan revealed in her video for Reebok. Needless to say, the "Fearless" singer comes from a family of creatives.