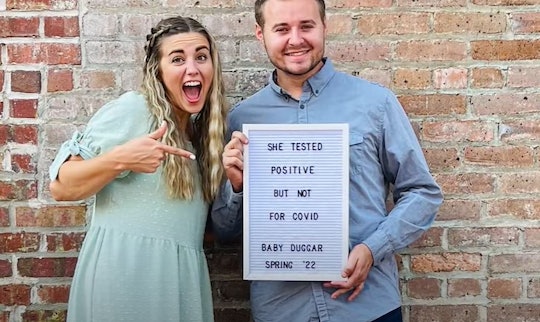 “She tested positive, but not for Covid.”

Though newlyweds Jedidiah “Jed” Duggar and his wife Katey revealed the happy news that they’re expecting, how they announced it has sparked backlash on social media. A few months after tying the knot, the couple revealed they have a baby on the way with a photo of themselves smiling and holding a letter board that read, “She tested positive, but not for Covid.”

Over the weekend, Jed and Katey announced they they’re expecting their first child together in a post on Instagram and in a YouTube video, in which Katey shared that she took the pregnancy test at Walmart. On Instagram, the couple shared photos of themselves kissing and holding a letter board that read, “And then there were 3. Baby Duggar. Spring '22.”

The questionable Covid joke was used in the couple’s Instagram caption and, as Without a Crystal Ball host and reality TV blogger Katie Joy first pointed out, in a photo of them holding a letter board in their YouTube video. “Funny how this isn’t the photo that Jed & Katey posted on Instagram. They did post this in the caption,” Joy captioned a screenshot of their video shared on her Instagram. “Even though a lot of people have made similar announcements like this — I find it so insensitive. Arkansas is facing some of the worst with Covid right now due to low vaccination rates. 656,000 Americans have died from Covid since the virus hit 18 months ago.”

As of Sept. 7, there have been over 7,100 Covid deaths in Arkansas, where the Duggar family is based, and a total of 465,315 cases, according to the Arkansas Department of Health.

While comments on the couple’s Instagram post are overwhelmingly positive and congratulatory, several on Joy’s post have called out the announcement as “tone deaf” and “tasteless.”

“Having 2 family members pass from COVID, I find this very tasteless and insensitive,” one person commented.

Another wrote, “I hate this. It's so tacky and distasteful. People are dying.”

“How disgusting to joke about a virus that has taken so many lives, and counting….” one more commented.

Romper has reached out to Jed and Katey for comment on the backlash.

Despite the controversy, there was a fair share of congratulatory comments from the Duggar family. “So so happy for y’all! You’re going to be the best parents!” Jed’s sister Jessa commented, while Joy-Anna wrote, “So excited for you guys!!! And the video was great!”

Jed and Katey tied the knot in April. For her 23rd birthday, Jed called his wife a “dream come true” and the love of his life. “So grateful to God for bringing you into this world 23 years ago, and bringing our paths together forever,” he captioned a picture of Katey on his Instagram in July. “Happy birthday from your greatest admirer!”