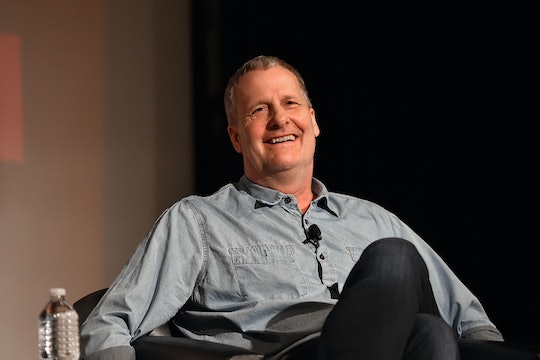 "In awe of Jeff Daniels' 'dad zooming in from the spare room' vibe."

Some celebrities took the freedom of attending an award show at home more seriously than others on Sunday. This is why Jeff Daniels at the 2021Golden Globes had people on Twitter chuckling. He took this freedom and ran with it, choosing to wear a flannel shirt over a tuxedo, and hanging in what can only be described as the basement guest room.

The 2021 Golden Globe Awards skipped over the red carpet due to the coronavirus pandemic, allowing nominees to attend the award show from the comfort of their homes via Zoom. While some still chose to get dressed up, others took the comfort route. Ahem, Jeff Daniels, ahem.

The 66-year-old actor and dad of three knows his way around a red carpet; he has been nominated for a Golden Globe award five times since 1986. So you can't blame him for wanting to be a little more laidback this year. Daniels, who was nominated for Best Actor in a Television Motion Picture for his role as James Comey in The Comey Rule, appeared during his category wearing a button-up flannel shirt in an unidentified room in his home.

Not only did he look comfortable, he looked super happy. Folks on Twitter, of course, took note.

It's Always Called "The Computer Room"

It's never "the study" or "the spare room where we keep the electronics."

I'm sure the popcorn was delicious, too.

I mean, he is a dad zooming in a spare room. Daniels and his high-school-sweetheart-wife, Kathleen, are the parents to three grown children, according to People, so yeah, he is still just a dad on Zoom.

I mean, you never know.

Just Circling Back Around

I mean, he has to have enough closets to store the iconic Dumb & Dumber costumes.

He Was Buying Movie Snacks

Pass the popcorn and candy, please.

He deserves an award just for sitting in some room.

Every College Apartment, Ever

It's like every college apartment just has a collection of closets and doors.

Hey, at least he's honest about what he looks like when the cameras are off. Leave it to Jeff Daniels to be representative of every dad at the 2021 Golden Globe Awards.