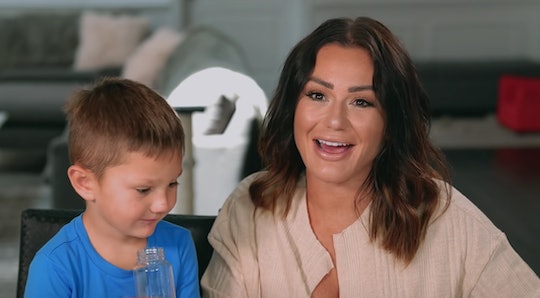 For the past two years, Jenni "JWoww" Farley has been documenting her son Greyson's incredible progress with his speech after he was diagnosed with autism. And just recently, the Jersey Shore star shared a heartwarming video of her son "crushing it" as he read a sentence about his mom out loud.

On Wednesday, Dec. 2, Farley posted a video on Instagram of Greyson sitting on the ground and reading the sentence "My mom is fun" from some word cards in front of him. Once he finished, cheers erupted from behind the camera and Greyson jumped up in excitement. "Greyson Matthews keeps crushing it," Farley captioned the video. "I cry every time I watch this."

Farley's most recent update about Greyson comes roughly two years after she shared in an interview with HollywoodLife that her now 4-year-old son was diagnosed with autism. Since then, the reality TV star and mom of two has been open about his language delay and the progress he's made. "It was really heartbreaking and frustrating as a mom when you see other 2-year-olds that are speaking and living their best life," she told HollywoodLife at the time. "Greyson is living his best life! He just doesn't understand what you're saying!"

In March, Farley told People that, despite any criticism she may face from "parenting police," she wants to share these updates about her son to start conversations and raise more awareness. "I feel confident as a parent to put out all the milestones, and I really just want to break the stigma," she told the magazine. "But, at the same time, there are always those backseat-drive parents — the people that want to tell you or insinuate that they know better. And they're not in your lives 24/7."

Beyond updating her followers about Greyson, Farley has also given her fans a glimpse into her life with her little ones. In October, she posted a sweet cooking video with her kids, a video of her doing sensory-friendly crafts with Greyson, who really loves their family cat, Muffins. Farley told People she hopes her candidness on social media ultimately helps other parents. "So I always try to stay above it, post the positive," she said, "because if I really do want to help parents out there and I really do want to make a difference so when my son is older, even if the OCD tendencies are still there, the stigma is gone."