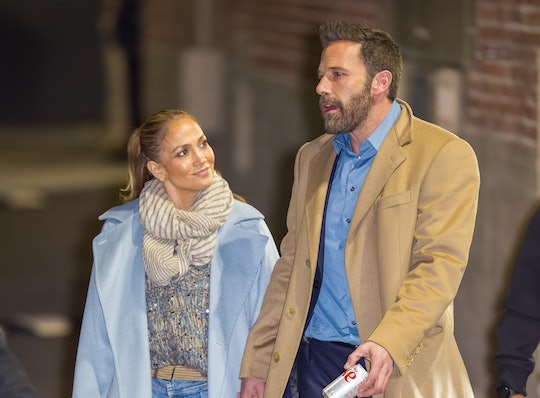 J. Lo & Ben Affleck Had A Glam Night Out As A Blended Family With Two Of Their Kids

"I appreciate this so much, so very, very much.”

To the world, Jennifer Lopez is iconic. But no one has more love and respect for the talented singer, dancer, and actress than her own family, as evidenced by their support at the iHeartRadio Music Awards last night in Los Angeles. J.Lo was radiating happiness as she accepted the 2022 Icon Award while boyfriend Ben Affleck and two of their kids cheered her on from the audience.

In a move that would impress any parent of pre-teens and teenagers, Affleck’s son Samuel, 10, and Lopez’s daughter, Emme, 14, respectfully showed support for J.Lo at the event. She was honored for her achievements that span decades and her continued impact on the entertainment world (see Marry Me’s entire soundtrack for an example of how she’s still making songs that get stuck in our heads), and it was so heartwarming to see her loved ones showing up for her.

iHeartRadio tweeted a short clip of the moment, showing Affleck standing up clapping with the two kids. “You know #BenAffleck had to show up and support @JLo,” the caption on the video reads. Fans were understandably thrilled, showing support with heart and clapping hands emojis.

“I appreciate this so much, so very, very much,” Lopez said when accepting the award. “I wish I could tell you that awards were the most important to me, but that's not true. And don't think that I don't appreciate the shiny, sparkly things, because I do! I cannot lie, everybody knows that I do. But this isn't why I do this. It's not what matters most to me. I really do it for you guys.”

This awards show marked the blended family’s first public appearance together since the Marry Me star and the Deep Water actor reunited in April 2021, setting our Bennifer hearts aflame. Unlike the first time the couple got together in 2002, both celebrities now have their own kids: Lopez is mom to twins Emme and Max, 14, with ex Marc Anthony, and Ben Affleck shares Violet, 16, Seraphina, 13, and Samuel with ex Jennifer Garner.

They’ve understandably been taking their relationship slow; in December 2021, Affleck opened up about how he wanted to protect his kids from media coverage surrounding his relationship. However, if they are going to step into the spotlight, supporting J. Lo is the perfect time to do it!