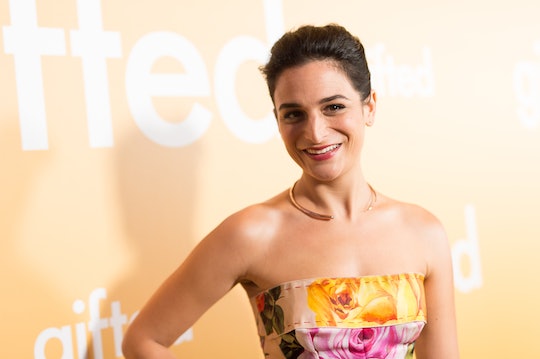 She calls it her "secret little treasure."

So this kid is probably going to be the coolest baby ever with the best sense of humor. During an interview with Seth Meyers on Thursday night, actress and comedian Jenny Slate announced that she is pregnant with her first child. The Parks and Recreation star and her fiancé Ben Shattuck are going to be parents in the near future. Slate showed off her baby bump during the interview and admitted that she has been spending the past nine months of quarantine have been... pregnant.

"Um, how have the exact last nine months been? They've been real pregnant for me!" she said

Slate and Shattuck, who got engaged in France in September 2019, apparently spend the very first night of the coronavirus pandemic lockdown, "We had a really romantic night of being together. Real sweet with my fiance." Then she baked bread, like everyone else seemed to do. And now, all these months later, Slate is showing off an impressive baby bump and telling Meyers, "I feel different."

The excited expectant mom has been enjoying her time being pregnant during lockdown, saying that "it's very nice to have something that is incredibly positive during a time that's hard and sad. It's nice to have a little secret treasure."

She also admitted it has been pretty great to just hang out and "chilling out, doing exactly what I wanted to do, not having to see anyone."

There are several ways Slate has been reveling in her pregnancy over the past months, not the least of which being the end of having to "figure out how to gracefully wear pants. I haven't worn pants in many moons."

The Little Weirds author has been keeping busy during the pandemic by doing a lot of birth prep, which could mean she and her art curator fiance Shattuck are getting close to the end date for her pregnancy. Hopefully just in time for the world to go back to somewhat normal, if 2021 looks any better than the nightmare scape of 2020.

Perfect timing for the world to welcome a baby who will hopefully inherit their mom's sense of humor. And sense of timing, come to think of it.