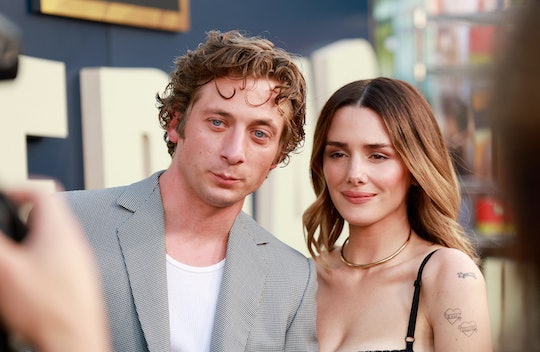 The Bear actor’s daughter have the cutest names.

Jeremy Allen White has become the internet’s new boyfriend. The former Shameless actor has become a breakout star with the surprise summer hit on Hulu The Bear, playing complicated young chef Carmen “Carmy” Berzatto. Anyone who has worked in restaurants recognizes that whole sexy, creative, tortured soul vibe, and White plays Carmy perfectly. But this is not his reality. In real life, White is a married dad of two who seems to absolutely adore his stable home life.

White first met his future wife, fellow actor Addison Timlin, in 2008 when they starred opposite each other in the 2008 television series Afterschool. The couple became friends and stayed that way for years, but clearly something changed at some point. Because they eventually became Instagram official in 2016 when Timlin shared a photo with him and called him her “ride or die.” They have been making a life together ever since. Not to mention making little people.

They have been married since 2019.

In October 2019, White married the Fallen actor in a civil ceremony at the Beverly Hills courthouse in Los Angeles, per People. Dakota Johnson and Chris Martin were also in attendance at the ceremony, where White and Timlin wore matching newlywed jackets with the words “‘Til death,” and “Buddy + Billie” written across the back with a heart. It seems those are their nicknames for each other. She captioned the photo “Happy hearts.”

They welcomed their first baby in 2018.

In October 2018, White and Timlin welcomed their oldest daughter, Ezer Billie. Timlin shared the happy announcement on Instagram with a photo of White getting skin-to-skin time with his newborn daughter and the caption, “Ezer Billie White 10.20.2018 Welcome to the world baby girl, it just got so much brighter.”

White’s daughter Ezer is his “heart.”

To celebrate Ezer Billie’s first birthday, White shared a photo of his baby girl on Instagram smiling with the caption, “My heart turned 1.” And that says it all.

Their daughter Dolores Wild came into the world in 2020.

White and Timlin welcomed their second daughter, Dolores Wild, in December 2020 and Timlin wrote in her Instagram announcement that she arrived “just in time to save the year.” She also called husband White her “everything,” and the feeling clearly remains mutual.

His wife is his “number one.”

In a June birthday post for Timlin, White wrote, “Superstar! My number one. It’s your birthday today. Thanks for being the gift that keeps on giving. Thanks for taking care of so many of us. You’ve been at the center of my life for so long now, I can’t remember much before, I’m lucky for it. You’re my whole heart. Happy birthday.”

He might be the internet’s boyfriend, but more than anything, he’s Addison Timlin’s husband.