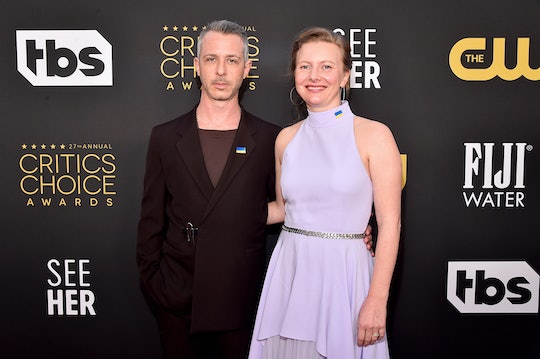 Jeremy Strong Has Three Daughters With His Wife

Playing Kendall Roy on Succession has been high on the list of priorities for actor Jeremy Strong for the past five years. The role is clearly a demanding one that takes up a significant amount of his energy. But not all of his energy. The Emmy award-winning actor makes sure to save some of that intense energy for his wife and kids, because it can’t be all Kendall Roy all the time. Not even as he enters his fourth and final season in his seminal role. He has to have some time away... and he’s lucky enough to have a lovely little family to help ground him. Here’s what we know about the actor’s family.

Strong first met his wife, Emma Wall, at a party in New York City in 2012. He and Wall were at the party even though Hurricane Sandy was raging outside, he told The Guardian, and dated for several years before marrying in 2016.

His wife is Danish and they married in a castle in Denmark.

When Strong married Wall, a half-Danish psychiatrist, in 2016, the pair tied the knot at a castle in Denmark called Dragsholm Slot. Now the couple split their time between their primary residence in New York City and Copenhagen, where they own a second home. “I love Denmark. I find it a very sane and gentle place,” Strong told The Guardian. “It feels like a refuge for me, and it’s great to have somewhere that’s a docking station after all this work, which I find very enervating and scary and stressful.”

The couple welcomed their first daughter in 2018.

In 2018, Wall and Strong welcomed their oldest daughter Ingrid, whose arrival changed her father’s focus. “My life has changed a lot in the sense that there’s some sort of stable center,” Strong told GQ about becoming a dad. “I never had that before — I was always just kind of a transient and work was the only thing. And that feels different now, in a very good way. There’s something to come home to.”

In 2019, the couple welcomed daughter Clara. And Strong’s non-Kendall life just kept getting fuller. “I have a lot more love in my life than he does,” Strong told GQ. “I feel very supported in my life — he doesn’t have any of that.”

Their youngest daughter arrived in 2021.

Neither Strong nor Wall have any presence whatsoever on social media, so there was no birth announcement when they welcomed their youngest daughter in September 2021. No photos or little anecdotes about who they are becoming; not even a name shared for their youngest child. All Strong had to say to The Guardian about his youngest child’s arrival was, “So three sisters,” with a smile.

And perhaps that says it all.