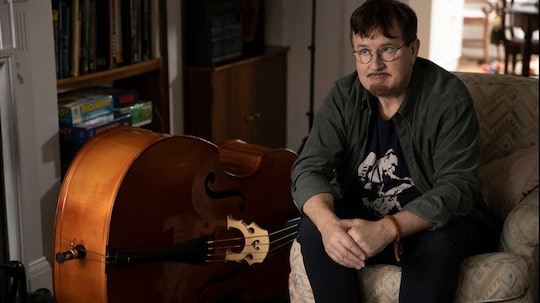 And his wife plays his wife on the series.

The cast of Ted Lasso are already big winners at the Emmy awards. The Apple TV+ show about an American college football coach who moves to the United Kingdom to head up soccer team AFC Richmond has made history with a whopping 20 nominations, including several in the Best Supporting Actor category. One of those nominated is Jeremy Swift, the man who plays AFC Richmond owner Rebecca Welton’s Leslie Higgins. The show sees Higgins as a hilariously sweet, well-intentioned member of the “Diamond Dogs,” along with Lasso, Coach Beard, and Nate the Great, but he is also a loyal family man. Much like Swift himself. While Swift doesn’t have five sons like Higgins, he is a dad and a husband in real life.

Jeremy Swift has been married to his wife, actress Mary Roscoe, since 1992. The actor, who also played Lady Violet Grantham’s butler Spratt on Downton Abbey, originally met his wife when the two were working on a play together, and they’ve been married ever since.

She Is His Screen Wife Too

Roscoe will most definitely look familiar to Ted Lasso fans, as she plays Higgins’ wife Julie on the show in several episodes. Roscoe, who has also been in movies like Paddington and Les Miserables, went in for a casting and won the part. Swift shared a proud tweet about Roscoe in August 2020, writing, “Mary Roscoe, my real life wife, plays Mrs. Higgins in ep 5 of #TedLasso this week. She is an actor of huge experience I should add!”

Jeremy Swift is a grandpa.

Swift and Roscoe are parents to 19-year-old daughter Stacey, who they adopted. In January 2019, Stacey welcomed her own child, making Swift a grandfather to a little grandson. He shared the news on Instagram with a photo of his daughter and her new baby as well as his wife smiling at the two of them. Very sweet.

The couple also adopted son Alfie, who is now 17 years old and looked excited to be an uncle in his dad’s Instagram photo from 2019 (above).

They’re Not Into His Music

Jeremy Swift, much like Leslie Higgins, is a bit of a musician himself. He recorded some of his songs in 2017, and told the Daily Mail that his teenage children in particular were less than impressed. “My son, who’s 13, likes one song a bit, but my daughter, who’s 15, doesn’t like my music at all. The kindest thing she’ll say is, “Daddy, it’s just not my thing.”’

I wonder if an Emmy win for Best Supporting Actor might be their thing. Time will tell.

More Like This
Catherine Reitman Calls It Like She Sees It: “Being A Working Mother Is Impossible”
You’ve Probably Been Pronouncing “Lilibet” All Wrong
10 Ways Prince George & Prince Louis Are So Different From Each Other
Sarah Michelle Gellar Is Facing A Terrifying Parenting Milestone: Sleep Away Camp