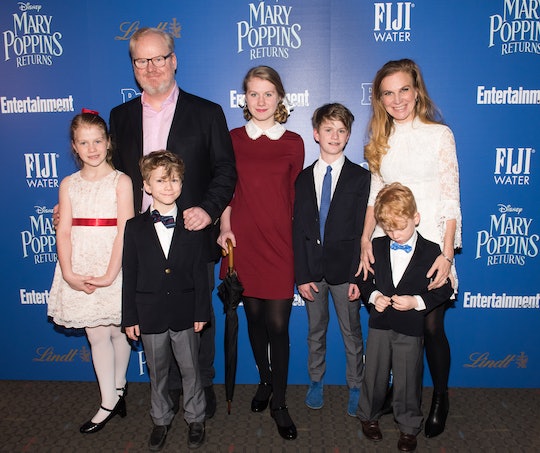 The Gaffigan house must be a treasure trove for comic material.

Jim Gaffigan’s stand-up routine tends to lean pretty heavily on his life with his family. Well, hot pockets are a big hit with his fans, too. But the comedian’s stories about his wife and kids are really the main event — especially because there are so many of them.

Gaffigan and his wife Jeannie are raising five kids together, which is sort of par for the course since they both come from big families themselves. "Because Jim and I both come from large families (he's one of six and I'm one of nine), five kids never seemed like a big deal,” Jeannie Gaffigan said during an interview with Drew and Jonathan Scott’s Reveal magazine. Let’s face it; they’re also great for comedy material.

He Talks About Family In His New Netflix Comedy Special

Gaffigan’s new Netflix special Comedy Monster delves into what pandemic parenting looked like with five kids and of course, how his married life fared during quarantine. “She’s good-looking, she’s smart, she’s creative, but you know what? Horrible taste in men,” Gaffigan joked during his special. “I’m happily married, but I have to say about once a week I catch my wife giving me a look like, ‘I’m going to have to let you go.’ Because I disappoint her. Constantly.”

Does Jeannie herself agree with that assessment? It seems unlikely. Read on to learn more about the comedian’s family.

Jeannie Gaffigan is a busy mom of five.

Jeannie Gaffigan was born in Milwaukee, Wisconsin and has been married to Jim since 2003. She is a comedy writer and producer who has written and produced on all of her husband’s comedy specials, as well as producing his television show The Jim Gaffigan Show, which was loosely based on their life together, from 2015 to 2016.

Jeannie also wrote a book, When Life Gives You Pears; The Healing Power Of Family, Faith, and Funny People about her struggle with a pear-sized brain tumor in 2017. In a 2019 interview with CBS News, she opened up about finding the tumor and the initial prognosis she was given. "Well, I was at a pediatric visit for my kids and when my doctor was speaking to me, I turned my head and I asked her to repeat what she was saying,” the mom of five explained. “And she was like, 'What's wrong with your ear?' And I'm like, 'Oh, I can't hear out of it.' So, she sent me to an ear, nose and throat doctor, and that's when the MRI revealed that I had, you know, like 30 seconds to live!"

Thankfully she survived. Jeannie underwent surgery to have the tumor removed, and even after the surgery it took months for her to recover. Because the tumor had been in her head for years, the removal saw her struggle with things like swallowing, frequent coughing, and even speaking.

Marre Gaffigan is the oldest child of Jim Gaffigan.

The couple’s oldest child is 17-year-old daughter Marre. She and her younger siblings have become stars in their own right since joining their parents for the popular YouTube series Dinner With The Gaffigans, which raises money to help feed health care workers.

Marre is a student at Marymount School in New York and is already showing signs of being a humanitarian and activist. For her 16th birthday in 2020, she asked for donations to build a computer lab for girls in India, as her father proudly shared on Instagram. Marre also hosts Gaffigan Kids Book Chat with her younger siblings, featuring inspiring stories of kids around the world. Marre’s own sense of humor is on full display in her book chats, where she tends to get dressed up as an announcer and engages with her little brothers whether they like it or not.

Jack Gaffigan is an actor in his own right.

The oldest Gaffigan son, 15-year-old Jack, is already an actor. He starred as young Jimmy on The Jim Gaffigan Show for both seasons. He has also starred in two of his dad’s television specials, and many of his social media posts, including a recent attempt at a plug for Comedy Monster on Instagram when Jack openly admitted that he did not watch the special and “can’t even name one of your specials.” Ouch.

Katie Gaffigan explained how to get a snow day.

Jim Gaffigan’s 12-year-old daughter Katie had her own moment in the spotlight in 2019, when she explained how to ensure a snow day from school in a video shared on her dad’s Facebook feed. Apparently you wear your pajamas inside out, pour ice down the toilet, and put a spoon in the freezer. Katie is also fairly ruthless when it comes to family game night, if Gaffigan’s Instagram post from December 2020 is to be believed. The entire family, including mom Jeannie, called Katie out over some suspected nefarious goings on and her reaction was outsized denial and high-pitched pleas for understanding. Hilarious.

As the fourth of five kids, 9-year-old Michael got his very own stand-up bit from his dad. Gaffigan explained that once you have four kids, “people stop congratulating you. Then they just treat you like you’re Amish.” Fortunately Michael, like all of his siblings, is a pretty funny kid. As he showed in an Instagram video when he and his brother Patrick took down the seafood industry and cook live lobster for the first time. Michael really went to town on telling people that they shouldn’t kill clams because “they make the ocean stay clean. And they die for it. Because of you guys who litter in the ocean.”

Mike and Pat have their own show.

The youngest Gaffigan, 8-year-old Patrick, often joins his big brother for the Mike & Pat Show, where they chat and try new food like Vegemite and Gaffigan tapes their reactions. The videos are predictably hilarious. Patrick’s reaction to eating Vegemite? Simply saying, “It tastes... bizarre.”

As you can see, the funny genes are strong in this family.

This article was originally published on May 26, 2021