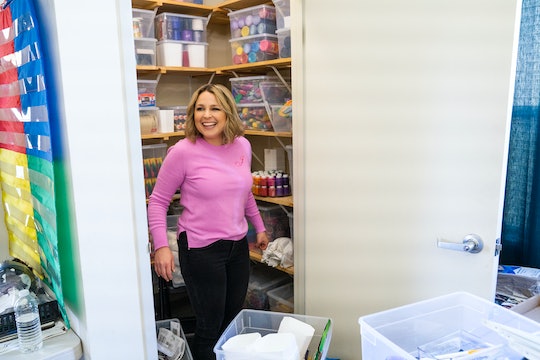 And they are huge fans of sugar, too!

Joanna Teplin loves wearing colorful headbands and organizing in rainbow order alongside co-star Clea Shearer on Get Organized with The Home Edit. The creative organizer is silly and fun on screen but keeps her home life very private. We do know that the co-founder of The Home Edit has been married to her husband, Jeremy Rubin, for over a decade and the couple share two kids: Miles Reid and Marlowe Aerin. In fact, the whole family recently appeared in Season 2 of the show, now streaming on Netflix.

Joanna’s husband, Jeremy, has a private Instagram account, but it does reveal that he has a pretty cool job. In his bio, it says he is a Vice President of Adult Formats for Warner Records.

Additionally, he wrote, “Can’t live without his family, great food, big laughs, and great music.” If laughs are his thing, it sounds like Joanna might have some competition for funniest one in the family!

Miles and Marlowe love watching their mom on set.

Joanna’s kids enjoy coming to set to watch their mom work, especially because they also get to hang out with Clea’s kids, Stella Blue and Sutton Gray. On March 18, The Home Edit posted a cute video to Instagram showing the difference between Season 1 and Season 2 — all four kids were sweet and smiling in Season 1, and they were running around and being silly in Season 2.

Joanna shares her love of sugar with the kids.

Going through the drive-thru at Starbucks and eating dark chocolate are two of Joanna’s “guilty pleasures,” as she called them, and it turns out, she shares her love of all things sweet with her kids. In a video clip from Season 2 posted by The Home Edit to Instagram April 5, Joanna and Clea are letting all four of their kids eat from an ice cream bar, complete with candy and chocolate syrup. Clea says her kids aren’t used to having sugar, but Joanna says, “My kids process sugar pretty well.”

In the clip, Marlowe says, “You can never go wrong with too much sugar,” and Joanna jokes, “They were trained by the best.” Hey, there’s nothing wrong with that!

Her kids are mini artists.

In an Instagram Story saved to The Home Edit’s Instagram account called “The Kids,” we see cute cards that Miles and Marlowe drew for their mom a few years ago for Mother’s Day. Marlowe’s card said, “I love you so sow mommy,” along with a family picture that hilariously didn’t include Joanna. Miles’ card includes a drawing of him and his mom, along with a poem that is sweet and sassy. It read, “My mom is as sweet as cake. She isn’t so tall but she is small. She is 5’2.” As tall as a golf cart.” It also said, “She loves sweets. That she can not help it!” before sweetly finishing it up with, “She is as loving as a teddy bear.” It’s obvious these two love their mama!