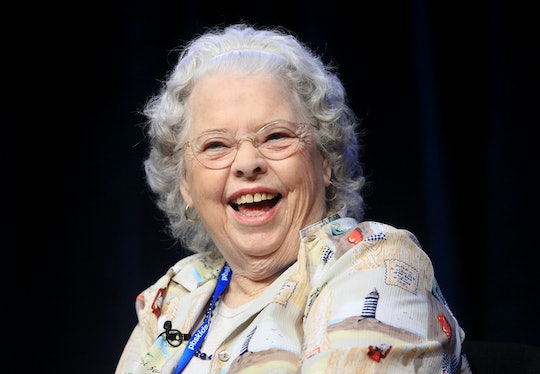 Joanne Rogers, Wife Of Mr. Rogers, Has Died At The Age Of 92

"We extend our heartfelt condolences to Joanne's family and the thousands of people who had the privilege of knowing and loving her."

It's a sorrowful day in the neighborhood. Joanne Rogers, the widow of Fred Rogers, has died at 92, Fred Rogers Productions announced in a statement on Jan. 14. The concert pianist was married to the star of the classic childhood TV show, Mister Roger's Neighborhood, for over five decades until his death in 2003 of stomach cancer at the age of 73.

"Joanne was a brilliant and accomplished musician, a wonderful advocate for the arts, and a dear friend to everyone in our organization," the statement continued. Rogers attended Florida State University and earned a master's degree in music for the piano, according to the Tallahassee Democrat.

"We extend our heartfelt condolences to Joanne's family and the thousands of people who had the privilege of knowing and loving her," Fred Rogers Productions concluded in its statement.

Rogers played an active role in the early parts of her husband's career, having been involved in his first PBS Show The Children’s Corner. After his death, she consulted in the 2018 documentary of her husband's life, Won’t You Be My Neighbor? and the 2019 drama A Beautiful Day In the Neighborhood. According to The New York Times, Rogers — born Sara Joanne Byrd on March 9, 1928 — approved of Tom Hanks portraying her late husband in the 2019 film.

The legacy of the Rogers will continue through the institutions they touched as well as Fred Rogers Productions. In 2018, the company commemorated the 50th anniversary of the premiere of Mister Rogers’ Neighborhood through a thoughtful rebranding. Their latest project is a new PBS Kids animated series called Alma’s Way, which is scheduled to be released this fall.

Joanne and Fred Rogers married on June 9, 1952, and welcomed two sons — James and John — together. The Rogers were staples in the Pittsburgh community and lived in the city for years.

"RIP Joanne Rogers," the official Twitter account for the state of Pennsylvania wrote. "Thank you for all of the kindness you brought to our commonwealth."