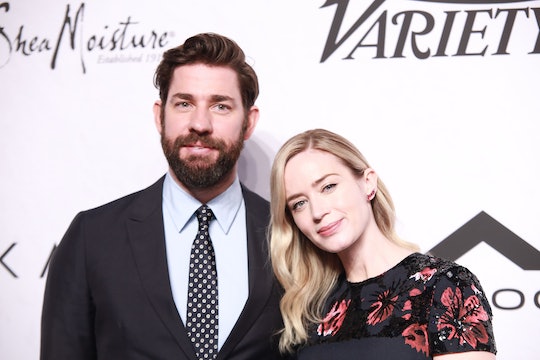 They even have British accents.

John Krasinski and Emily Blunt are, like so many other celebrity parents, fiercely protective of their daughters’ privacy. The actors are careful not to share photos of their daughters, 8-year-old Hazel and 6-year-old Violet, but that doesn’t stop either one of them from getting in a good old parent brag now and again. Who can blame them? Hazel and Violet are clearly precious little characters in their own right, much like their hilarious parents.

Blunt and Krasinski have been married since 2010, and have long since enjoyed a reputation as one of the most well-liked couples in Hollywood. They have weathered any negative publicity thrown their way, even when Amy Schumer (jokingly!) said they had a “pretend marriage” on Instagram, and come out apparently unscathed.

So what’s their secret? Perhaps it’s all about keeping their family life as private as possible to minimize any potential damage from the spotlight. Especially for their children. Hazel and Violet might be the center of their parents’ world, but they have no intention of sharing too much of them with the rest of us. But what they have shared is both adorable and hilarious.

In an interview with Jimmy Fallon on The Tonight Show, Krasinski admitted that it took his new movie DC League of Super Pets to convince his two daughters that yes, he is in fact working in show business. “I think up until now they didn’t actually believe I was in the business,” the proud dad told Fallon. “Because they’ve never seen anything I’ve done.” He went on to note that they would not have seen A Quiet Place or Jack Ryan, and their reaction was priceless. “They were like ‘wow, you’re not an accountant,’” Krasinski said.

Emily Blunt opened up about how her lifelong stutter affects her as a mom.

The actress has been opening up about her struggles with stuttering as a child, and how to has affected her as a mom. In an interview with Hello! in July 2022, she had some advice to give to other parents who might also struggle with a stutter, “I am always sure to remind parents that it's just a part of you, it doesn't define you, it's just a piece of who you are. And everyone's got something. And this happens to be your thing. And it's okay. There's light at the other end.”

Their daughter Hazel is adorable.

In May 2014, Krasinski shared the first and only photo of his oldest daughter Hazel on Twitter. “Pics of kids should only come direct from parents,” he tweeted at the time. “So I'm thrilled to introduce you guys to Hazel!!! #NoKidsPolicy.”

In an interview with Ellen DeGeneres, Blunt explained that she had given birth three months earlier and that Hazel “came out ready for a photo shoot,” she was so cute. As for Krasinski, Blunt credited him as “the burp king,” which is genuinely a great skill with a new baby.

Just over two years later, their second daughter’s arrival was announced on July 4, 2016. In keeping with their tradition of choosing “old lady names,” Blunt described explained to DeGeneres, they named their daughter Violet.

Blunt also accurately described the difference between first and second pregnancies to C magazine, per People, “The first pregnancy is the most self-indulgent thing in the world because you get massages and prenatal yoga and hypnotherapy CDs. During this one I forget that I’m even pregnant. I’m hoisting a 2-year-old around!”

They have British accents.

The whole family has been living in England for the past year, and Blunt told Jimmy Kimmel in a December interview that her daughters have since developed British accents because of it. "Miraculously, they're sounding quite British, which I'm completely over the moon about.” Violet in particular has really embraced her new accent, “My little one sent me a video... of her singing 'Jingle Bells' and she [sang in an] almost Cockney [accent]. It was almost like Dick Van Dyke singing 'Jingle Bells,'“ Blunt told Kimmel, “The craziest accent ever. It was kind of brilliant.”

In February 2020, The Office star told DeGeneres about his hilarious oldest daughter. It seems she saw him trying to create a photo wall for their family and, looking at the frames with stock photos, commented, “It’s so good... don’t you think you should put pictures of us up?”

Violet is tough to impress.

Violet doesn’t like to watch her mom in movies.

Hazel and Violet are little humanitarians.

Hazel and Violet designed a t-shirt for Pepsi.

During the pandemic, Hazel and Violet decided to do a little giving back to the community. In an effort to help raise money for employees working in the restaurant industry that was hit especially hard, Krasinski told chef Guy Fieri on his Some Good News YouTube show that his two girls designed a t-shirt with proceeds going to the Restaurant Employee Relief Fund.

Krasinski is a proud dad.

Krasinski’s hosting gig on Saturday Night Live in January saw him deliver a sweet t-shirt tribute to his girls; he closed out the show with a shirt emblazoned with the letters H and V for his daughters.

They don’t know just how famous their parents are.

In an interview with The Sunday Times, Blunt admitted that she and Krasinski don’t want their daughters to know they’re famous. “If they can remain oblivious for the longest time I'd be thrilled,” she said. “They don't even want to see what I do. They don't even like it when I put on makeup.” Hazel, however, is figuring it out. “It's a strange thing to navigate, you know," Blunt said. “[She] came home the other day and we were in the kitchen and she goes, 'Are you famous?'”

Whether they figure out their parents are famous or not, at least they know one thing for certain. They are truly adored children.

More Like This
John Krasinski’s Daughters Have Officially Seen Him In 'The Office'
How Old Should Kids Be Before They Watch The 'Christmas Story' Sequel?
Rubble From 'PAW Patrol' Is Getting His Own Spinoff Series Full Of "Messy Demolition"
'Sesame Street' Puts Fun Spin On 'The Nutcracker' In New Holiday Special

This article was originally published on June 2, 2021