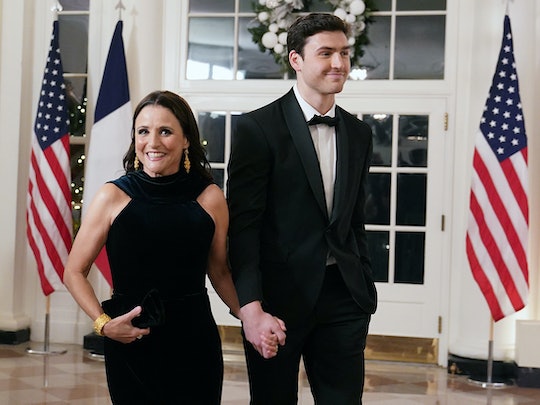 The Veep star said it was “very exciting” to be there and her smiles confirmed just that.

Julia Louis-Dreyfus has returned to the White House — but the Veep star didn’t have Gary Walsh and that trusty bag following behind her. On Thursday, Louis-Dreyfus brought her 25-year-old son, actor Charlie Hall, as her date to a White House state dinner honoring French President Emmanuel Macron and his wife, Brigitte, and the Seinfeld alum looked like the proudest mom.

The Emmy-winning actress arrived at the state dinner on Dec. 1 holding hands with her son as she told reporters it was “very exciting” to be at the event. Louis-Dreyfus, who shares sons Charlie and Henry, 30, with husband Brad Hall, wore a floor-length black dress with gold jewelry while Hall wore a chic tux to the dinner.

On Friday, Louis-Dreyfus reposted a photo of their arrival on her Instagram Story and wrote, “Yup! That’s us! God bless the USA and vive la France.”

Louis-Dreyfus was one of many celebrities to make the more than 400-person guest list. Also in attendance were Stephen Colbert, Jennifer Garner and her daughter Violet, John Legend and Chrissy Teigen, Anna Wintour, and Lupita Nyong'o. Guests were treated to an extravagant menu including lobster, caviar, American artisanal cheeses, and a crème fraîche ice cream.

Louis-Dreyfus’ youngest son isn’t just a good date for such a special dinner; he has a lot in common with his mom as he’s been following in her acting footsteps in recent years. Indeed, Hall has a number of roles on his resume; he played Bradley in 2021’s Moxie, Kieran in the TV series Love, Victor, and has starred as Andrew in several episodes of Mindy Kaling’s HBO Max series The Sex Lives of College Girls.

Speaking to Entertainment Tonight in September about Hall following her career path, Louis-Dreyfus said, “He's really digging being an actor and he's really good. Good on him.” But when he comes to her for acting advice, she’s pretty blunt. “Get out of the business,” she joked to the outlet.

While her sons are both adults now, Louis-Dreyfus has been open about the bittersweet side of watching them grow up: empty-nest syndrome. “It’s so thrilling to see your kids evolve into thoughtful, active, independent people,” she said in 2009. “… but what do you do without them?”

Well, scoring an invite to a swanky state dinner at the White House is one way to soak up some quality mother-son time.