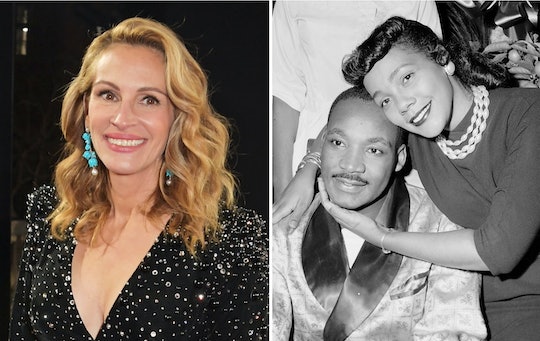 “They helped us out of a jam.”

Julia Roberts has a special connection to Martin Luther King Jr. and his wife, Coretta Scott King. During a recent conversation with CBS News reporter Gayle King for the History Channel, the 55-year-old Academy Award-winning actress revealed that the Kings paid the hospital bill for her birth to help out her parents “out of a jam.”

“The King family paid for my hospital bill,” Roberts told King during the sit-down in an interview clip shared by Zara Rahim on Twitter. Roberts said her parents, Walter and Betty Lou Roberts, who were both activists as well, could not pay for the hospital and the Kings helped them.

Roberts went on to share how her parents got involved with the King family. Before Roberts was born, her parents owned a theater school called the Actors and Writers Workshop in Atlanta and the Kings reached out about enrolling their kids. “One day Coretta called my mother and asked if her kids could be part of the school because they were having a hard time finding a place that would accept her kids,” Roberts shared with King. “My mom was like, ‘Sure, come on over,’ and so they all just became friends and they helped us out of a jam.”

King awed by Roberts' story replied, “In the ’60s, you didn’t have little Black children interacting with little white kids in an acting school, and your parents were like, ‘Come on in.’ I think that’s extraordinary, and it sort of lays the groundwork for who you are.”

Roberts was born on Oct. 28, 1967, in Smyrna, Georgia. Rahim posted a clip from the interview in honor of The Pretty Woman star’s 55th birthday last week.

This isn’t the first time the story of Roberts’ family connection with the Kings has gone viral on Twitter. In August 2021, Ashley Reynolds, a senior celebrity producer of The Kelly Clarkson Show, tweeted a viral thread about Roberts’ childhood and the two families’ “close friendship.” In her thread, Reynolds shared an essay about Roberts’ parents' theater, written by Phillip DePoy in 2013. He recounted how the Ku Klux Klan blew up a car outside Roberts’ parents’ school after Yolanda, the eldest King daughter, was cast in a play in which she kissed DePoy, who was white. “It takes a lot of rehearsal to get a stage kiss just right. And, as it turned out, kissing was, at that time, the most important aspect of the theater, at least for me. But no amount of rehearsal could have prepared us for an exploding Buick,” DePoy wrote.

Reynolds also posted a transcript from an old interview with CNN. Speaking with the news outlet, Roberts, her mother, and Yolanda King discussed a racial incident in 1990 when a bar owner would not let Julia’s friend inside because was Black. Roberts would later call the town racist and they would boycott. As for the relationship between both families and the theater company, Yolanda called it an extended one.

“It was an extended family, it really was,’” Yolanda King told CNN in 1990. “And all of those Black kids and white kids getting, no problems. We had no problems whatsoever, no racial problems.”