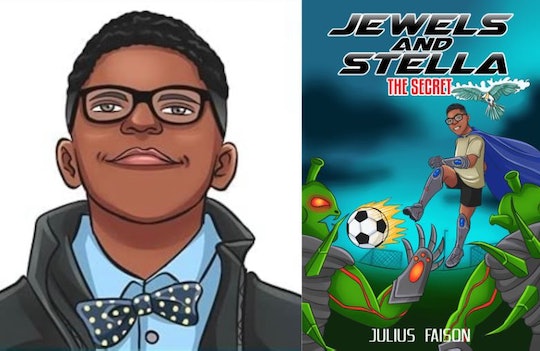 “I want my readers to see a Black character who is a protagonist in a book because I don’t see it as much as I would like.”

Inspired by his love for Greek mythology and his pet parrot, a new Black superhero is born, thanks to the vibrant imagination of a North Carolina kid. Julius Faison has just penned his first book titled, Jewels and Stella: The Secret. The science-fiction children’s book tells the story of a sixth-grade Black boy named Jewels. Together with his parrot, Stella, the pair must save his parents, classmates, and the world from extraterrestrial monsters.

Released this past May, Jewels and Stella is the 12-year-old’s first published work. “Readers have said they really like it,” Julius tells Romper. His mother, Tomeico Faison, was influential in helping develop the plot with her son. During quarantine, the two would work on storytelling and creative writing skills together. “I came up with the story and my mom asked questions to help me to develop the characters and the plot. We worked a lot on descriptive writing,” says Julius.

Though he had doubts, his mother kept him encouraged and guided him throughout the process. “My mom was supportive but for a while,” he adds, “I didn’t think what she was saying about publishing was possible.”

Indeed, mother knows best. Faison has been observing her bookworm and his creative writing potential as early as elementary school. “He would fall asleep reading and wake up talking about what he read,” she tells Romper of Julius’ early love for reading. “He really did not like to write which is one of the reasons I suggested the book. I wanted him to know that writing can be fun.”

One of Julius’ favorite genres is Greek mythology, which has a heavy influence on his own book, specifically when it came to crafting his characters. “I like Greek mythology because it’s adventurous and has exciting plot twists,” he says. Julius especially enjoys the Percy Jackson series by Rick Riordan and the Tristan Strong series by Kwame Mbalia, a newer series that follows a Black teen who battles African gods.

With fewer than 400 of all children’s books published in 2020 in the U.S. featuring Black characters, according to a study from the University of Wisconsin’s Cooperative Children’s Book Center, Julius also had the matter of representation on his mind. And he didn’t take the tragedy route that often ends Greek tales. As a Black boy, Julius wanted to see more characters in literature who looked like him as the heroes who didn’t have to go through a trial of suffering like Hercules, Perseus, or Odysseus to become one. “I want my readers to see a Black character who is a protagonist in a book because I don’t see it as much as I would like,” he says.

Plans are already in the works for a sequel. Julius shares that the real-life bird, Stella, passed away but two new beaks have since joined the family. “We just got two new birds, Sunny and Yang, and I want to write a series with them in it,” he says, adding that the next book could also bring back some previous characters since they are “supernatural beings.”

In the meantime, Julius also has movie aspirations. “I want to make into a movie but change the ending to a surprise,” he says. “I am not sure if Tyler Perry knows but hope he finds out!

Jewels and Stella: The Secret is available for purchase on Amazon. Julius plans to use the proceeds from the sales of his book to make a donation to Durham Nativity School in North Carolina where he attends.