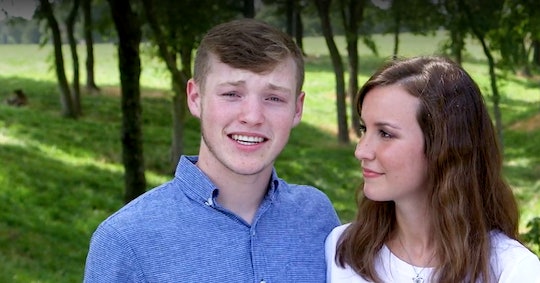 "Today we have started a journey together that God crafted long before we ever knew it was meant to be."

After a short courtship and just three months of being engaged, Justin Duggar is officially married. The 18-year-old Duggar son, who appears on the TLC reality show Counting On, tied the knot with 19-year-old Claire Spivey.

"We are so thankful for the love of Christ that has brought our lives together and teaches us what real love looks like," the couple told Us Weekly in a statement. "There is no greater joy than marrying your best friend. We are thankful for the prayers and support so many have shown us through our engagement and look forward to this new chapter of our lives together as husband and wife."

As the Duggar family now has another marriage to celebrate, here is everything you need to know about the newlyweds.

Justin & Claire Got Married On Feb. 26

The couple wed in Texas — where Claire is from, according to The Sun — just one day before her birthday. The wedding was attended by many of Justin's Duggar siblings, including Jana, Joy, and John-David, who posted photos from their trip to Chip and Joanna Gaines' Magnolia Market in Waco, Texas the weekend of the wedding. Justin's older sister, Jill, also attended the wedding with her husband, Derick Dillard, which she called a "quick date trip" to Texas.

"It was such a gorgeous wedding!" Joy commented on their Instagram post. "Love you both very much and am SO happy for you guys!"

They Announced Their Courtship In September 2020

The couple first announced that they were officially in a courtship in September, via a video posted on TLC Me. While Claire and Justin's family have known each other for years, the couple first met in Spring 2019. "God brought Claire into my life, and I wasn't really expecting it, but he brought her along right when I needed her," he said in the courtship announcement. "And ever since then, I knew she was the one."

Since then, Claire, a secretary for Spivey Construction, has been by Justin's side through his wisdom teeth surgery and subsequent recovery. Together, they enjoy snowboarding, reading the Bible together, spending time outdoors, and spending time with one another, according to TLC Me.

They Got Engaged In November 2020

Two months after announcing their courtship (which was actually 14 months long, according to Claire), the couple announced to Us Weekly that they were engaged. "There is nothing comparable to finding the one you're meant to spend your life with," they told the magazine. "We now know we have found that in each other. We cannot wait to be married and are looking forward to a life together of faith in Christ, love for one another, and happiness."

In a birthday post for his bride, Justin, who currently works as a remodeler, gushed about Claire. "I'm so thankful to have married my best friend!," Justin wrote. "I love you so much."