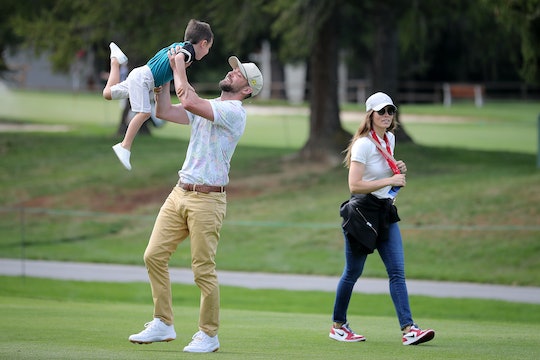 After quietly welcoming a new baby during the coronavirus pandemic, the Man of the Woods singer celebrated his first Father’s Day as a dad of two.

After quietly welcoming their second child together last year, Justin Timberlake and Jessica Biel are finding that two kids can keep you a heck of a lot busier than one. The pair have joked that having two kids feels like having a thousand kids, revealing that one has slept since their second child’s arrival and that they’ve had to transition to a man-on-man defense when it comes to wrangling both kids for things like dinner or bedtime.

They Became Parents In 2015

Biel and Timberlake welcomed their first child, a son named Silas, together in 2015. The pair then quietly welcomed Phineas, their second child (and second son), in the summer of 2020, making them a family of four.

While roughly five years separates the couple’s oldest son, 6-year-old Silas from their youngest, 11-month-old Phineas, the boys are already best friends. “I think they are, I really do,” Biel told late-night host Jimmy Fallon in May when asked if her sons were besties. “I was really worried. You just never know what’s going to happen and how your older one is going to feel about the little one. They just think each other are so funny and it’s so amazing to watch.”

Justin Shared The First Photo Of Phineas On Father’s Day

Timberlake shared the first public photo of Phineas while marking Father’s Day on Instagram. Tucked amongst photos of Timberlake with his own father and stepfather, was a photograph of the Man of the Woods singer with his two sons. In the photo, Timberlake and Silas sit on a couch playing a video game while young Phineas sits on the floor at their feet holding what looks to be an upside-down game controller.

“Being a dad is better than I ever could have imagined,” Timberlake wrote in the caption. “Thankful to my dads and my grandfathers for leading the way, making the sacrifices for me to live out my dreams, and for teaching me that REAL LIFE happens in all the little moments.”

During an appearance Dax Shepard’s Armchair Expert podcast, Biel revealed that although Phineas’ birth came as a total surprise to fans, neither she nor Timberlake had intentionally planned to keep the pregnancy a secret. “I had, like, a secret COVID baby,” Biel told Shepard. “IT wasn’t like it was supposed to be a secret. It was just, COVID happened and then I went to Montana with my family and never left.”

They Don’t Know How Famous Their Parents Are

Although their parents are known across the world, Biel and Timberlake are just “mom” and “dad” to Silas and Phineas. While speaking with Fallon last month, Biel explained that while Silas can recognize his dad’s music and knows he voiced the character of Branch in Trolls, he doesn’t seem all that impressed. “Whenever he hears daddy’s songs he’ll go, ‘Oh yeah, that’s dad, that’s dad. Like, no big deal, whatever,’” Biel told the late-night host.

Unfortunately for Biel, Silas has zero interest in watching the kid-friendly work she’s done in Pete the Cat. “I’ve tried to get him to watch the show,” the actress told Fallon. “He will not watch the show.”