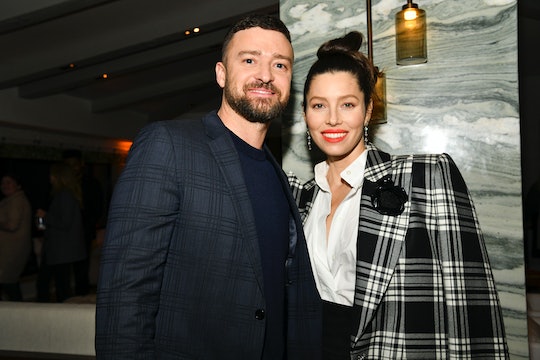 While they haven't spoken publicly about this exciting bit of news, Lance Bass happily confirmed that his former *NSYNC bandmate is officially a dad of two. After weeks of speculation about whether or not Justin Timberlake and Jessica Biel welcomed another baby, Bass has spilled the beans.

Late last week, Bass was appearing on Entertainment Tonight when he confirmed that the couple welcomed a second child earlier this year. He did not reveal the baby's sex or when exactly Biel gave birth, but said that he has seen photos of the little one. "The baby is cute of course, it's Justin and Jessica!," Bass told Entertainment Tonight.

Bass also told the news outlet that while he knows the baby's name, he wouldn't be sharing it because "Justin would kill me!"

While Romper has reached out to the couple's reps for further comment, The Daily Mail first reported that Biel privately gave birth to her second child, a son, in July. Neither has publicly spoken about Biel's pregnancy or posted any photos indicating that they were expecting on social media, choosing to post throwback photos of Biel — or photos from the waist up — in recent months.

Keeping their baby news out of the public eye for as long as possible certainly falls in line with how they've worked hard to maintain their son Silas' privacy. The couple rarely shows his face in photos, choosing to just post snaps of the back of his head.

This actually isn't the first time that one of Timberlake's friends might have spilled the beans about baby number two. Musician Brian McKnight told Hollywood Life in August that Timberlake likely took a break from making new music to focus on his kids and family. "He just had a new baby," he told the site. "I think that's going to be really inspiring for him and he'll have some new music based on that, I'm sure."

And although they haven't talked about their second child, the couple has previously talked about wanting to expand their family. In a 2018 interview with Beats 1's Zane Lowe, Timberlake said, "I want to have as many kids as I can, if I'm being honest."

As for Biel, she told Entertainment Tonight that same year that she would be open to having more kids in the future. "You know, kids are amazing," she told the outlet. "They are really hard but they are really amazing. I think it would be amazing for us to have a bigger family. I don't know if that is in the cards for us, we'll see."

Now that the cat's out of the bag, who knows, maybe fans will get to hear about how Silas is adjusting to big brother life.