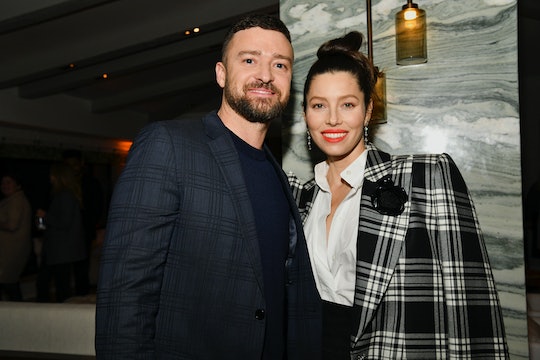 The singer described his second child with wife Jessica Biel as "awesome."

After more than six months of speculation, Justin Timberlake has revealed the name of the son he welcomed with wife Jessica Biel last year. The singer-songwriter confirmed he'd become a father of two in a virtual interview that aired Monday on The Ellen DeGeneres Show.

"His name is Phineas," Timberlake revealed. "He's awesome and he's so cute and nobody's sleeping. But we're thrilled. We're thrilled and we couldn't be happier, very grateful."

Timberlake and Biel were reported by The Daily Mail to have quietly welcomed their second child in July, although neither the couple nor their spokesperson would confirm the news. In September, Lance Bass confirmed to Entertainment Tonight that his former NSYNC bandmate was busy with a newborn but kept mum about the child's name, saying Timberlake would "kill" him if he revealed it.

While speaking to DeGeneres, Timberlake revealed that parenting two children is a far cry from parenting one. "We don't see each other anymore," he joked of wife Biel when asked how it was to have two children compared to just one. "It's a lot of fun. I guess the saying goes, 'go from a zone defense to a man-to-man really quickly.' You sort of split. 'You go get that one, I'll get this one.' But it's great."

Biel and Timberlake welcomed their first son, Silas, in 2015 and have, since then, opted to keep him out of the public eye. On Monday, however, Timberlake revealed Silas has quickly settled into the role of big brother. "Silas is super excited," Timberlake said. "Right now he's very much liking it. Phin can't walk yet or chase him down, so, I don't know, we'll see what happens."

While Timberlake said his new family of four was settling in quite nicely, it seemed there was one parenting decision the "Better Days" singer appeared to regret.

"We got [Silas] a Nintendo Switch," Timberlake told DeGeneres before widening his eyes and raising his eyebrows dramatically. "It's like child crack. ... I don't know if you've ever seen a child when you threaten to take their technology away but it's like, 'come on daddy, don't do me that way.'"