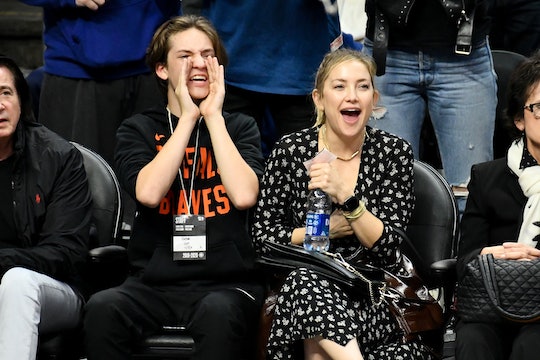 Some other famous faces were in the audience as well.

The lights dim, the electric guitar is amped up, and the crowd holds its breath as Codependence takes the stage at The Mint in Los Angeles. But no one is more nervous and excited than Kate Hudson, mom of guitarist Ryder Robinson, 18, whom she shares with ex Chis Robinson. The Almost Famous star shared an update from the crowd as she watched her son perform live, and it is so relatable.

In the first one, she’s nervously biting her nails with a friend, Juliana Roberts. The next photo is a closeup of Ryder on stage, dressed casually in a t-shirt and playing the guitar. The last picture in the carousel shows Hudson with Kurt Russell, who is the longtime partner of Hudson’s mom, Goldie Hawn.

Actress Leslie Mann also attended the show, as she appeared in several photos with Hudson posted by Roberts. She commented on both Hudson and Roberts’ posts with a “❤️.”

Mann is mom to Maude, 24, and Iris, 19, with husband Judd Apatow. Iris and Ryder confirmed their relationship on Instagram in Feb. 2022, with a source telling People at the time, “They both live on the westside part of L.A. and grew up there. They both attended the same school in Santa Monica. They've known each other for a while."

It’s cool to see Mann and Hudson hanging out to support Ryder! Who knows, they may be in-laws one day! For now though, Ryder is going to college.

Matt Bellamy, lead singer for Muse, shared photos from the event on Instagram yesterday. “Very proud of my boy!” he captioned the post.

His post included a video of the band playing and a candid of Hudson smiling with a drink in her hand and enjoying the show.

Hudson commented, “Can’t believe it! Off to the races! 😭”

Last week, the Siblings Revelry podcast host shared a video of Robinson and her second-born son Bingham Hawn, 11, whom she shares with Bellamy. Hudson is also mom to Rani Rose, 3, with fiancé Danny Fujikawa. She captioned the video, “My boys. What more could a mom ask for other than boys who play rock and are hilarious at the same time ✅,” adding that she will miss Ryder when he goes to college.

Ryder comes by his talent naturally, as his dad is the lead singer of The Black Crowes. Hudson herself is a singer, and she did an iconic cover of Ariana Grande’s 7 Rings on The Tonight Show Starring Jimmy Fallon in Jan. 2022, as well as announcing that she is recording an album in April 2022.

Maybe they will perform together in New York! Crossing our fingers for that adorable mother-son collaboration.