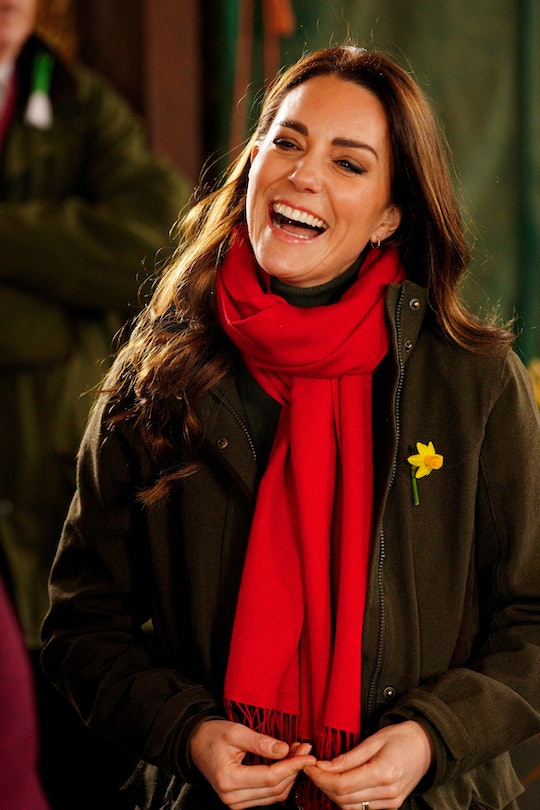 If You Call Kate Middleton Simply "Kate," Turns Out She'll Be Pretty Chill About It

And that goes for calling Prince William just “Will,” too.

When meeting members of the royal family, there are no technical rules on how to address them, only centuries of royal protocol and tradition to follow. For instance, when addressing the Duchess of Cambridge, you might want to call her “Your Royal Highness” on first meeting and then “Ma’am” afterwards. And for her husband Prince William, it’s “Your Royal Highness” and then “Sir.” Not, as one royal fan recently called them, “Kate and Will.” Even if we all sort of do think of them as Kate and Will, it seems like one of those inside thoughts you are meant to keep to yourself. But don’t worry. Apparently if you do happen to mess up and call them by their first names, they’re going to be fine with it. Welcome to the modern monarchy everyone.

The Duke and Duchess of Cambridge visited the Country Fare Wholefoods and Fine Cheeses at Abergavenny Food Market during their mini tour of Wales on Thursday as part of their St. David’s Day celebrations. There they met Nicky Hurst, a woman after my own heart who apparently got a little confused about how to address the royal couple and landed on “Kate and Will.”

Which was fine with them, as Hurst told People. “They are lovely. I wasn't sure what they'd be like and what to call them in terms of their titles. I called them 'Kate' and 'Will,' and they were really relaxed.” Considering Prince William himself refers to his wife as the more formal “Catherine” when discussing her and she in turn refers to him as “William,” it says a lot about the royal couple that they’re OK with being called Kate and Will.

This relaxed approach to dealing with the public is very much in keeping with Prince William’s vision for the monarchy when he someday becomes king. In the BBC documentary in honor of Queen Elizabeth’s 90th birthday, the Duke of Cambridge explained how he would like things to change within the royal family in the coming decades. “Well, I think the Royal Family has to modernise and develop as it goes along and it has to stay relevant,” he said. “And that's the challenge for me, how do I make the Royal Family relevant in the next, 20 years time — or it could be 40 years time, or 60 years time — I have no idea when that is going to be.”

Certainly a monarchy that doesn’t stand on ceremony or protocol when meeting members of the public will be something of a change as the Duke and Duchess of Cambridge take on more royal duties in the coming years. And perhaps a refreshing one at that.