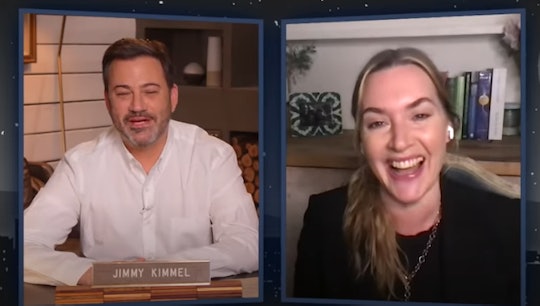 He's ready to be "an actress."

It's always nice when your kids want to be just like you, right? Well, at the very least, it's kind of funny. Like when Kate Winslet's son Bear told his mom that he "wants to be an actress" recently. The 7-year-old is clearly no fool. Who wouldn't want to be just like his glamorous, talented mom with the amazing career and everything?

The actress caught up with Jimmy Kimmel on his talk show on Thursday to promote her new film Ammonite and talk about life in general. Naturally, being a mom of three, 20-year-old daughter Mia and 17-year-old son Joe from a previous relationship as well as 7-year-old son Bear with husband Edward Abel Smith, her kids came into the conversation. One story about young Bear stood out from the rest, perhaps as the burgeoning young star hoped it might.

As Winslet explained to Kimmel, "The other day my son was very funny. He turned to me and said, 'Mom, I've got a confession to make. He was very serious."

It seems the 7-year-old was ready to get real about his career path. And the first step was sharing the news with his mom who, let's face it, might know a thing or two about the business.

Kate Winslet's son Bear knows what he wants to do for a living.

It's no wonder young Bear has a flair for the theatrical. Not only is he the child of an Oscar-winning actress like Winslet, his dad is no slouch in the dramatic department either. Case in point; Smith has changed his name not once but twice. And the first time, as she explained to Kimmel in that same interview, he changed it to something rather rock and roll. Or exactly rock and roll, "So his birth name is Abel Smith. And as time went by and Ned became Ned—who is quite an original personality—he just decided at one point in his life to just change his name to Rocknroll. Ned Rocknroll. So when I met him, his name was Ned Rocknroll."

He eventually changed it back to Smith because he is a dad now and I guess dads aren't allowed to be Rocknroll.

As far as names go, Bear Blaze Winslet is pretty rock and roll if you ask me. Winslet explained her baby boy's name in an interview with Ellen DeGeneres in 2014, saying that they chose the name based on a childhood friend of hers, according to USA Today, "A friend of mine when I was younger was nicknamed Bear, and I just had always really loved it and he was very much a bear — he was everyone's shoulder to cry on, he was a big bear hug, he was just this great figure in my life — and I just always remembered him and that's where it came from."

If Bear Blaze Winslet is hoping to be an actress, he's growing up in the right family.