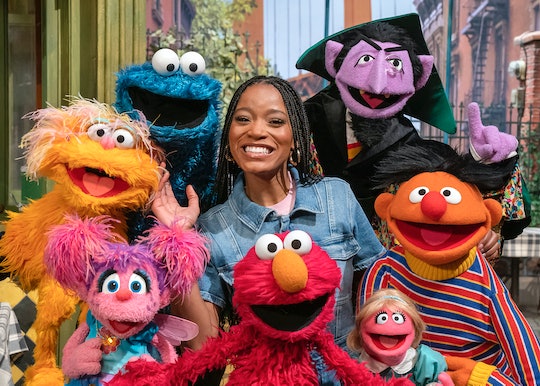 Keke Palmer Remixed "Old MacDonald Had A Farm" With Elmo & TBH, It's A Bop

This might be the best version of “Old MacDonald Had A Farm” yet.

Elmo needs to give lessons on how to make the very coolest of friends because when Keke Palmer recently visited Sesame Street, those two instantly hit it off. And even performed a solidly entertaining remix of “Old MacDonald Had A Farm” in the process. How does Elmo do it?

The Akeelah and the Bee star visited Sesame Street for the first time ever and seemed to have the time of her life hanging out with Elmo. So much so that when he asked to sing “Old MacDonald Had A Farm” she not only sang along, but she launched into a modern new version of the song that even parents will be happy to listen to on repeat.

Wearing a denim jumpsuit and looking absolutely ecstatic, Palmer danced alongside Elmo. She even put on little horns to represent a cow, a cute little nose as a pig... then added her own rap about how “the farm has lots of animals, and each one makes a sound.” Those sounds, if you’re curious, include, “a moo, an oink, a neigh, a bah, a squeak,” and now Palmer is worried, “with all these sounds, how does Old MacDonald sleep?” Fair question.

Palmer’s big finish saw her dressed as a goat and harmonizing effortlessly. It’s possible no human has ever looked more joyous to wear a goat’s beard, singing with a muppet. And Palmer herself admitted in an Instagram post about her Sesame Street visit that she had the “best” time on the children’s show. “3-year-old Keke is LIVING for this moment!!” she wrote. “I had the best time with all my furry friends on @sesamestreet. FR though @elmo, miss you already.”

It’s possible the singer had more than just her 3-year-old self on the brain when she was on Sesame Street; while she is not yet a mom, Palmer has admitted that she would like kids sooner rather than later. “I would like to have kids at some point. But, you know, this is the thing; I don’t want to have kids too later on, because I definitely want to be able to get that snap back,” she said on The Rickey Smiley Morning Show in 2018. “But at the same time, I don’t really want to have a kid just yet, you know what I mean? I mean, the clock is ticking.”

Maybe hanging out with her new pal Elmo four years later has her thinking the time is nigh. Or maybe she just really loved Sesame Street. Don’t we all.