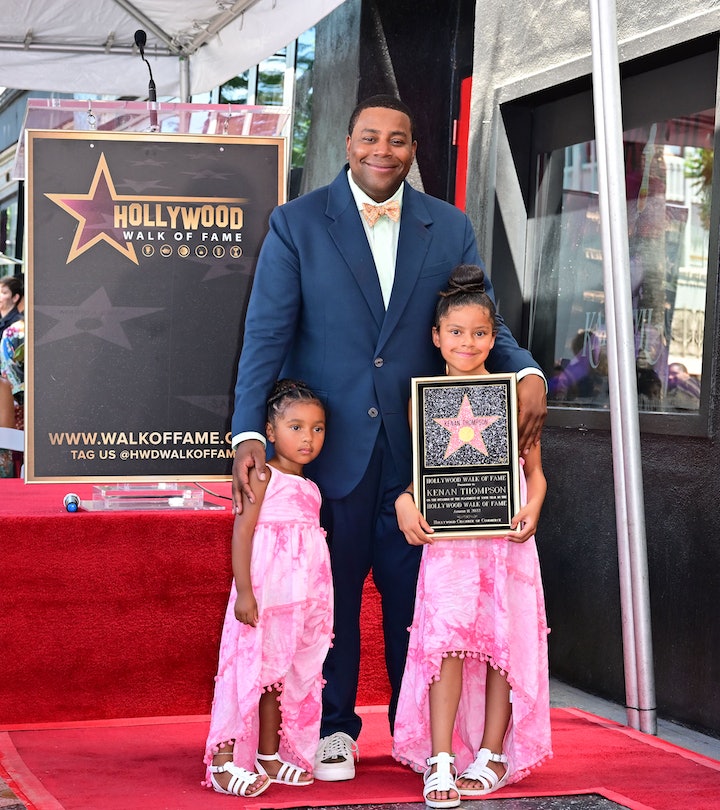 The host of the 2022 Emmy Awards is a proud dad of two, even if his star status has changed his wardrobe.

Kenan Thompson is best known for his breakout role in the ‘90s kids sitcom, All That, and the smash-hit movie, Good Burger. He’s also considered the longest-tenured cast member of Saturday Night Live. As a matter of fact, when he joined SNL at the age of 25 in 2003, he was the show’s youngest cast member. Thompson was recently honored with a star on the Hollywood Walk of Fame in August and he’s now the host of the 74th Emmy Awards. Beyond his incredible career, Thompson is a proud father of two daughters. And when he not making millions on the big screen, he’s a family man in Atlanta.

Thompson was married to Christina Evangeline for 11 years.

In June 2022, Thompson filed for divorce from wife Christina Evangeline, who is a model and interior designer, after 11 years of marriage, Page Six reported at the time. The couple had reportedly separated in April 2022 and have been “successfully co-parenting” their two daughters, according to TMZ.

The two met through a talent manager and tied the knot in 2011 in the Arctic Room of the George Aquarium in Atlanta, according to E!, and Nick Cannon reportedly MC’d the ceremony.

In June 2014, the couple welcomed their first daughter Georgia Marie, now 8. Four years later, Gianna Michelle was born in August 2018, now 4. The Fat Albert star joked that his coolness left when he became a dad.

“One day you're not a dad and then the next moment you are. You're just a dad from that point on,” he said in the Apple TV+ documentary, Dads. “And definitely, my coolness just got sucked right out of me. I didn't know... I didn't even feel it, but I just immediately started wearing black socks and shorts and just being really corny at stores and over-asking questions about items that are super obvious and in my face.”

He added that having kids is a learning lesson. “The constant worry though,” the SNL star reflected in the documentary, “is learning how to calm down and to see how resilient kids are — learning what the real warning signs are, as opposed to just being worried about every little slip and fall.”

His daughter Georgia was on America’s Got Talent.

The couple’s daughter, Georgia, 8, is a huge America’s Got Talent fan. When her father set in as a guest judge for the show, Georgia finally got her opportunity to live her AGT dreams. Christina posted snippets of their appearance on her Instagram. “When asked if she’d ever want to be on AGT she said yeah - but only as a judge,” Christina captioned the post last August. “⁣Fast forward a few weeks, here she is in @simoncowell’s chair. ⁣lol wut.”

She added Georgia’s response, “Mommy, did you see me steal the show?”⁣⁣ To which Christina replied, “Always, Girl.”

In 2020, Thompson talked to People about having kids four years apart and how it saved him in the diaper duty department. “I'm so thankful they weren't in diapers at the same time,” he told the magazine, adding that he considers the task one of “the hardest things to do on the planet.”

Georgia is also a pretty helpful big sister. “It helps to have an older sister to run around and teach [Gianna] those things 24/7 that we can't necessarily communicate the same kind of way,” he told People. “[Gianna will] just pick things up watching her sister, basically — how to walk up and down the stairs.”

His daughters have a sense of humor, just like their funny dad.

According to Thompson, his girls are pretty funny, in different ways. “My big girl is one of the biggest hams I’ve ever seen. She is so funny. She’s 6 years old. It’s going hand in hand, her being funny and her also being highly energized, just all over the place and just being a kid,” Thompson previously said, per HuffPost. “And my baby girl, she’s such a sweetheart, but she has a real devious sense of humor, too. So I think that’s more from her mom’s side.”

This article was originally published on Sep. 18, 2021