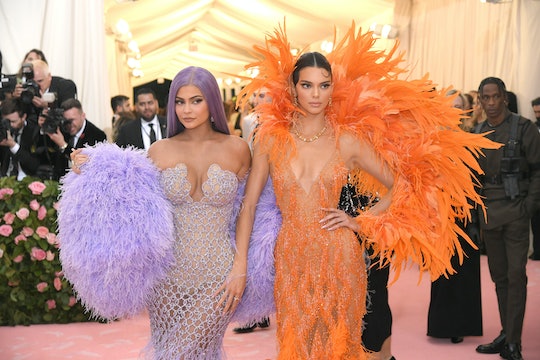 And she has some valid points...

Kendall Jenner has a front-row seat to the many complicated, stressful, emotional, and exhausting parts of parenthood since all five of her siblings have kids. There are cute moments too, of course (have you seen Stormi’s first TikTok?), but the model values her alone time — something you don’t get a lot of as a mom. She knows this firsthand thanks to her sister Kylie Jenner, mom of 4-year-old Stormi and a baby boy with Travis Scott. In a trailer for Season 2 of The Kardashians, which premieres Sept. 22 on Hulu, Kendall reveals one thing Kylie said in particular that was “birth-control” for her, and it is so relatable.

In the trailer, Kylie is pregnant with her baby boy (who was born on Feb. 2), and she complains about wanting to go out. “I need my first night out,” Kylie says in the clip. “I haven’t had a night out in almost a year.”

Then it cuts to a confessional with Kendall saying, “This is definitely a massive birth-control moment for me. It’s a lot.”

To be fair, she has a point. A night out pre-kids was as simple as finding the perfect outfit and doing your hair and makeup. Post-kids, you have to do the same, plus hire a babysitter, explain the rules and any food allergies, lay out the bedtime routine, and pay by the hour. That is, assuming your kids aren’t running a fever or feeling extra clingy to their parents. And if you are breastfeeding, you have to lug a pump and milk storage bags and a cooler — none of which fit in a cute crossbody bag.

Even if you aren’t going out, it can be hard to score alone time as a mom. Kids will follow you into the bathroom if you aren’t careful and invade every bit of your personal space. So it makes sense that Kendall isn’t ready yet!

The Kardashian/Jenner matriarch, Kris Jenner, doesn’t quite agree. Kendall told E!’s Daily Pop in April 2022 that her mom is “100%” pressuring her to have kids with her then boyfriend Devin Booker. Kendall told Daily Pop that her mom "will just randomly text me and be like, 'I think it's time,' and I'm like, 'Is this not up to me?!'"

“I still have a lot I need to figure out before I can welcome a child into my life,” Kendall said in Episode 7 of The Kardashians, per HuffPost. “Like, I’m still just enjoying life on my own and I’m OK with that right now.”

The reality star recently graced the July 2022 cover of Vogue China, and she shared pictures of the spread on Instagram in a skin-tight black bodysuit. Kylie commented, “WOWWWWW,” and Gigi Hadid wrote, “I think this is my new fave of your covers 🔥 🏎.”

Kendall also posted a suntanning picture of her in the buff on June 26, where she is lying on her stomach scrolling her phone on a deck by the pool — another thing parents couldn’t do unless their kids were in the hands of a trusted babysitter.

Despite her complaints, Kylie still does get out without the kids. She posted a picture yesterday in a tight leather dress and heels, prompting Khloe Kardashian to comment, “You are smokin hot. Look at you queen!!!!!”

She also travels the world with her daughter (and her daughter’s doll Coconut), as evidenced by these sweet pictures. Kylie summed up parenthood with a heartfelt post on May 8 of Stormi at the beach, writing, “Being a young mom just means we met a little early and i get to love you a little longer.”

And who can forget this year’s Met Gala? Kylie and Kendall looked stunning in white and black gowns, respectively.

One thing’s for sure: if Jenner ever does decide to have kids, she’ll have plenty of experienced siblings who can babysit for her when she wants a night out.