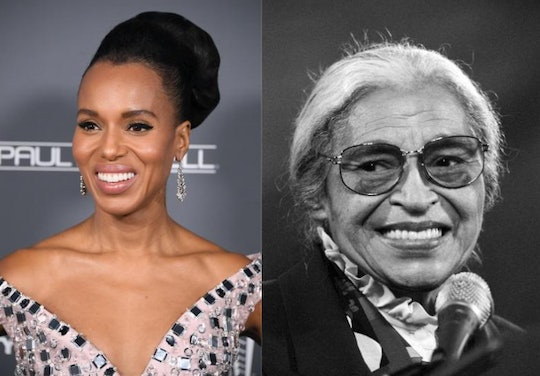 “It was an honor to honor her.”

Rosa Parks sat down so Black women like Kerry Washington could stand up. In a moving tribute to the civil rights leader, the American Son actress and mother of three honored Parks by remaking her iconic black and white mugshot image from 1955.

“Back with some more #BlackHERstory! This time celebrating THE Rosa Parks,” Washington captioned the images shared on social media. “A lot of people think that Rosa’s activism started with her refusing to give up her seat on the bus. But she lived a life of activism long before that. Fighting, boycotting, marching, and even working as an investigator for the NAACP, advocating against sexual assaults on Black women.”

The first image is a side-by-side image of Parks and Washington. The second shows the original 1955 mugshot, while the third photo in the actress’ post is a newspaper clip of the incident. Parks was arrested on Dec. 1, 1955 in Montgomery, Alabama, after a bus driver ordered her to give up her bus seat to a white passenger, and she refused to move.

“It was Rosa Parks’ act of civil disobedience on that bus that sparked a revolution,” Washington added. “She took that seat in order to take a stand. That seat on the bus was her fighting stance — and so we continue the fight today, in whatever way we can!”

For years, it has always been the belief that Parks, who worked as a dressmaker at the time, didn’t get up because she was too tired from work. But in later years, Parks, who was also an active member of the Montgomery chapter of the NAACP, later clarified that was not the case.

“People always say that I didn’t give up my seat because I was tired, but that isn’t true,” Parks said in her 1992 book, Rosa Parks: My Story. “I was not tired physically, or no more tired than I usually was at the end of a working day. I was not old, although some people have an image of me as being old then. I was 42. No, the only tired I was, was tired of giving in.”

Washington wrapped up her post with a call for action. “Lets ask ourselves, what can we do! Sit. Stand. March. Make calls. Volunteer. Talk to your family and friends,” she wrote on Instagram. “Do whatever you can and however, you can. Rosa taught us that. And we are forever grateful. It was an honor to honor her.”

Cheers to individuals like Washington who are making sure our trailblazers are never forgotten.

More Like This
Quinta Brunson Is Giving Back To The School That Helped Inspire 'Abbott Elementary'
Karamo Brown Teamed Up With His Son On A New Children’s Book To Share A Powerful Message
Travis Scott Is Passionate About HBCU Education & Put $1 Million Towards It
This Mom Gave Birth On Graduation Day, So The University Brought Her Degree To Her