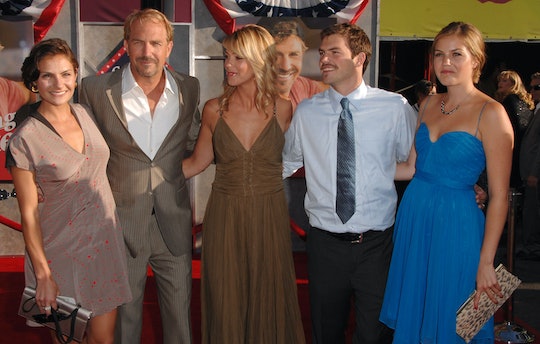 Kevin Costner Has His Own Family Dynasty

The Yellowstone star is a dad of seven in real life.

We all know Kevin Costner as the sometimes ruthless, always gritty patriarch John Dutton from Yellowstone. As a rancher, a businessman, and a father of four, he has a lot to juggle in his life. And Costner plays him so well it’s impossible to imagine anyone else in that role. Perhaps because he is a patriarch in his own life as well. Costner is a dad of seven kids, so playing John Dutton probably feels like a walk in the park to him. Here’s what you need to know about the actor’s big family.

He married his college sweetheart.

In 1978, Costner married his college sweetheart Cindy Silva, who he met while they were both studying at California State University in Fullerton. Much like Costner, Silva was interested in acting and reportedly played a Disney princess at Disneyland during her summer breaks, per The Express. The couple were together for 16 years and welcomed three children together before divorcing in 1994.

His daughter Annie is a filmmaker.

Costner and Silva welcomed their first child together, daughter Annie, in 1984. Annie followed in her parents’ footsteps to become an actor in her own right, starring in The Baby-Sitter’s Club as, you guessed it, Annie, and even taking on roles in two of her dad’s movies, The Postman and Dances With Wolves. Annie Costner also started her own production company, Sound Off Films, where she creates documentaries. Annie married husband Dr. Danny Cox in a ceremony at her dad’s private estate in California, where he walked her down the aisle.

His daughter Lily is also an actor.

Born in 1986, Costner’s second daughter Lily is also an actor who starred alongside her dad in The Postman in 1997. Coincidentally she also starred in The Baby-Sitter’s Club with her older sister Annie. The apple really does not fall far from that tree. In 2004, Lily Costner was “Miss Golden Globe,” and her dad could not have been prouder. “This will be a special night for me knowing how carefully she has thought about this and come to the decision on her own,” Costner said at the time, per Backstage.com. “This will be an extraordinary experience for Lily and all of us family and friends who have watched her grow up.”

Who knew The Postman was full of Kevin Costner’s children? Joe Costner, the family’s oldest son who was born in 1988, also starred in The Postman alongside his dad. He joined his dad in the 1996 movie Tin Cup too, so now everyone should go back and watch to see if they can see a resemblance.

After Costner’s marriage to Silva ended in 1994, he eventually dated actress Bridget Rooney. While their relationship did not last, the two welcomed son Liam in 1996. He appears to be the first of Costner’s children who did not go into acting. In fact, Liam has no public presence on social media at all. It’s unclear if he has a relationship with his father or his siblings, but he may just be a private person who prefers to stay out of the spotlight.

His wife Christne Baumgartner gave birth to their son Cayden in 2007.

Costner married his second wife, model Christine Baumgartner, in 2004 after several years of dating. "She said, 'I'm going to wait for you, but not long. When you come to your senses, come back to me,'" Costner told Parade about his second marriage. "And I did. Maybe it's the ability to say you're sorry." They welcomed their first child together, son Cayden, in 2007 when Costner was 52 years old.

His youngest child, daughter Grace Avery, was born in 2010.

Finally, 26 years after first becoming a dad in 1984, Costner welcomed his youngest child in 2010. Daughter Grace Avery came into the world, and the family was complete.

“There’s so much room for love.”

Costner opened up about the struggles of having two separate sets of children in an interview in 2015, and made it clear that he had so much room in his heart for all of his kids. “It almost seemed impossible to love the first [child] any more than you loved them. And then suddenly the second one comes, and you think there’s so much room for love. There’s so much room,” he said per Closer Weekly. “And that’s the way it is with children, and if there was any, perhaps jealousy that existed, I basically reminded [my older kids] that they were going to have twice as long with me on this planet. I said, ‘Look, they’re not going to have what you had,’ and at that point, they all just embraced each other.”