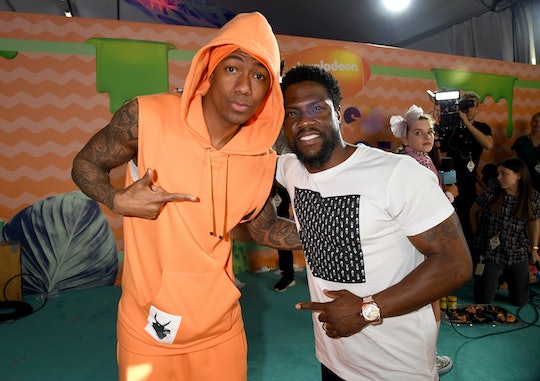 “For any advice on fatherhood? Call my best friend Nick Cannon.”

If you decide to prank Kevin Hart, just know the comeback will be epic. In an attempt to get his friend Nick Cannon back on a previous prank, the comedian put his friend’s actual cell phone number up on billboards in various cities for anyone who needed advice on fatherhood.

Hart posted a picture of one of the billboards in Los Angeles, with a picture of the llama Cannon got him for his birthday two weeks ago. That surprise gift was shared in a hilarious IGTV video on the Fatherhood’s star page.

The billboard posted above a Courtyard by Marriott hotel read: “For any advice on fatherhood? Call my best friend Nick Cannon,”poking fun at the 40-year-old’s seven children he’s welcomed with four different women.

“Since my brother @nickcannon decided to buy me a lama for my B-Day I decided to do something nice for him as well,” Hart captioned his post on Instagram. “Here is a digital billboard in Los Angeles….I also did some in ATL & NY….if u want any advice on fatherhood please call my BEST FRIEND @nickcannon ….”

“I’m sure his phone has been ringing nonstop,” he added. “GOTCHA BACK B****H #PRANKWARS.”

And apparently, that’s been the case for the Wild ‘n’ Out host. Cannon reposted Hart’s billboard post on his Instagram Story and captioned it, “My phone won’t stop ringing! @kevinhart4real is a a**hole!” He also shared a few videos of people actually calling him via FaceTime and their shocked reactions when he answers. No word on how long the billboards will be up but fans seem to definitely be taking advantage of it!

Poor guy. But according to CNN, he has since diverted the unsolicited calls to voicemail, with a message for fans to "be part of his next prank."

During an interview with Power 106 Los Angeles back in June, Cannon opened up about expanding his family. “I’m having these kids on purpose,” he said. “I didn’t have no accident. Trust me, there’s a lot of people that I could’ve gotten pregnant that I didn’t. The ones that got pregnant are the ones that were supposed to get pregnant.”

Well, there you have it! In the meantime, it seems the prank wars will continue between the two friends. We can’t wait to see how Cannon tops this one!