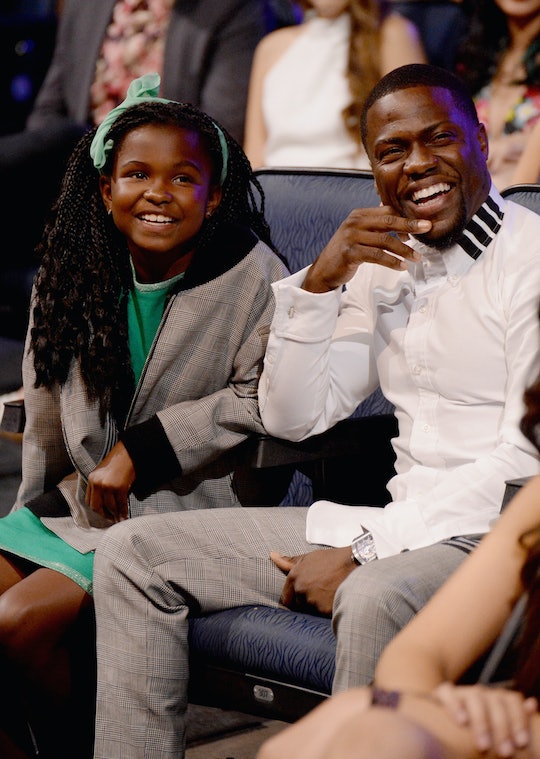 “My little girl is growing up.”

Comedian and actor Kevin Hart has officially reached a nerve-racking parenting milestone: teenage driving lessons. On Monday, the Fatherhood actor shared in an Instagram selfie featuring himself and his oldest daughter, 16-year-old Heaven, that he’s teaching her the ins and outs of hitting the road.

“My little girl is growing up,” Hart, 42, captioned the image, as he sat in the passenger seat while Heaven is seen sitting alert in the driver’s seat.

Several of Hart’s celeb friends, who are also dads, officially welcomed him to the teenage driver’s ed club.

“All downhill from here champ,” rapper Nelly commented, who has two kids, Chanelle, 27, and Cornell, 24.

Kings of Comedy, Cedric The Entertainer, cosigned with Hart and wrote, “Maaan!!! Tell me about it.”

Others seemed to just be surprised that Heaven is at official driving age, such as fellow celeb dad and Think Like A Man co-star, Gary Owens, who commented, “WTF?” Meanwhile, other celeb parents are manifesting author vibes in the teen’s life, like Real Housewives of Atlanta’s Porsha Williams. “Can she please write some books I can share with my baby girl,” Williams commented.

Hart shares Heaven and his 13-year-old son Hendrix with his ex-wife, Torrei Hart. Overall, Hart is the father of four, including Kenzo, 3, and 9-month-old, Kaori Mai, with his current wife, Eniko Hart.

Hart’s relationship with his daughter has been one of rebuilding and transparency. In a recent interview on Red Table Talk, Hart recalled how Heaven reacted to the cheating scandal with Eniko. "My daughter was tough on me, until this day my daughter is tough on me," he told Will Smith on the Father’s Day special. "Getting my daughter to understand that I was sorry, that I made a mistake — that was real.”

The actor also spoke about the lashing his daughter gave him about the treatment of her own mother and their relationship. “My daughter had a talk with me about her mother that rocked me. She checked me,” he told Smith. “She said, 'I want you to stop saying because when you say these things, Dad, this and this and this.' 'But honey, I don't mean — I'm just talking.' 'It doesn't matter, Dad.”

Sometimes we need those tough truths. It’s nice to see the pair are in a loving place together! And let’s hope Hart includes one of the hardest techniques in his driving lessons: parallel parking!