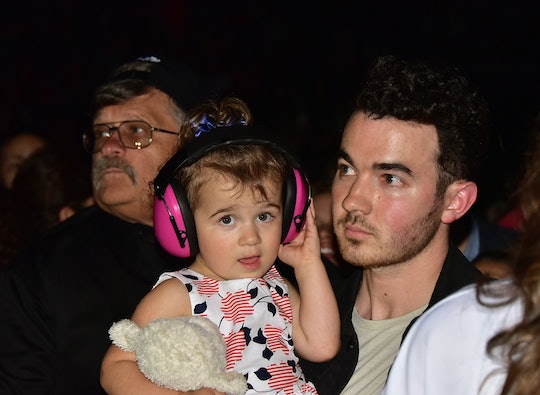 Pretending to be a super popular pop star is something we've all done. Heck, don't we all still belt out to the classics in the shower with a shampoo bottle microphone from time to time? Not everyone, however, can pretend to be their famous dad and uncles, which is what Kevin Jonas' daughters did recently. The 33-year-old father of two recorded his daughters, 7-year-old Alena and 4-year-old Valentina, pretending to the Jonas Brothers and arguing over who got to be Kevin. Yes, it was adorable.

Using three Billboard Music Awards as microphones, Alena and Valentina did their best impressions of the Jonas Brothers, as if they were at a concert. The rocked out just like their dad and uncles, Nick and Joe Jonas, in their pajamas sitting on top of a kitchen island.

"I'm Joe," Alena says into one "microphone" with a deep voice. "I'm Nick," she then says into another.

But little Valentina was more set on taking after her dad. "I'm Kevin," she says with an equally deep voice. But it wouldn't be playtime between sisters without some light arguing. The girls got into a slight tiff over who got to be Kevin, but Valentina ended up getting to portray her dad.

It's safe to say that these Jonas sisters are big fans of the Jonas Brothers. In 2019, the two girls got to attend their first Jonas Brothers concert and have been known to rock out with their pretend instruments from time to time. In fact, Alena is such a big fan of her dad's day job that she spilled the beans about the 2019 Jonas Brothers reunion to her kindergarten class. "She's so proud...she did tell her entire school the Jonas Brothers were coming back, before the Jonas Brothers were," Kevin recalled during an appearance on The Tonight Show Starring Jimmy Fallon.

Step aside, Kevin, Nick, and Joe: the Jonas Sisters are going to be the next musical sensation 20 years from now. Just wait for it.