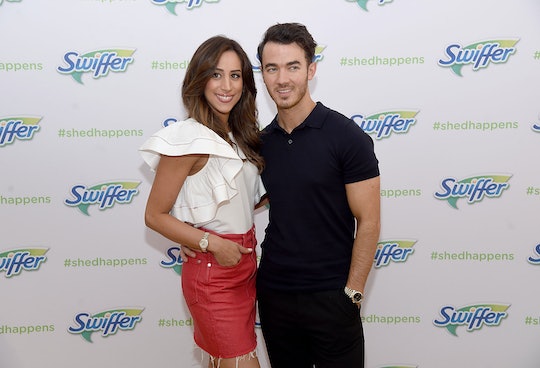 The Jonas Brothers are back. On Friday, the band (of brothers) released their first single in six years, according to Rolling Stone, which is an incredibly long time. So much time, in fact, that some (new) fans might not be too clued in about the brothers and their lives at home. So, some people might be surprised to know that oldest brother, Kevin Jonas, has a wife and two kids. And if people were wondering — how many kids does Kevin Jonas have? The answer might be a little surprising because the Jonas Brothers really are all grown up.

All die hard fans know that Kevin Jonas is the oldest brother and therefore the oldest person in the band. And while his younger brothers, Joe, Nick, and Frankie Jonas (also known as the Bonus Jonas) might have won over the hearts of fans, Kevin was always in a league of his own. At just 31 years old, the guitarist for the Jonas Brothers has already started a family.

In 2009, Kevin and his wife, Danielle, got married after dating for two years. And this really started their life together. Just 10 years later and one E! reality show later, the couple has two daughters together.

And here is the low down on their super adorable kids.