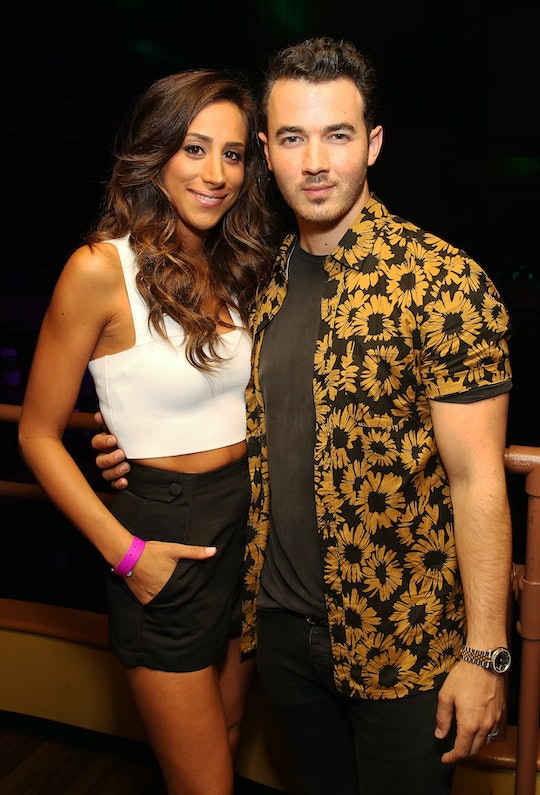 I don't know if you guys heard or anything, but the Jonas Brothers are back together. To be fair, they have been brothers this whole time so it's not like they were exactly living without any kind of contact. But they're performing together again, much to the delight of millennials everywhere. And of course, now that they're officially back together we want to know a little more about them. While I think most people know who Nick Jonas' new wife is, thanks to the many headlines about their wedding, some people may be curious about Kevin Jonas' wife, because she's quite successful in her own right.

Kevin Jonas met Danielle Deleasa when both of their families happened to be visiting the Bahamas in 2007, according to Rolling Stone. Now keep in mind this was peak Jonas Brothers era, just two years into their boy band cult-ish Disney Channel popularity.

Despite the fact that they were obviously hugely famous, it seems Deleasa didn't actually know about the Jonas Brothers when the two met. This didn't matter to Jonas at all, as he said in an interview with Chelsea Lately in 2012, he actually tracked her plane home and called her immediately, according to HuffPost: "It was kind of creepy. [She] probably shouldn't have stayed with me, but she did.”

The couple dated for two years, according to Rolling Stone, before marrying in 2009 at Oheka Castle in Huntington, New York in front of 400 guests. Including, of course, the other two Jonas brothers, Nick and Joe.

Just three years after getting married, now Kevin and Danielle Jonas starred on two seasons of their own E! reality series, Married To Jonas. While many couples might struggle with the idea of having to star on their own reality series, Jonas told Chelsea Handler that the experience proved to be a great one for him and his new wife because it encouraged them to "communicate more openly," as HuffPost reported.

Clearly those communication skills paid off, because the couple are still going strong 10 years later. According to the Daily Mail, they are parents to two little girls, 5-year-old Alena and 2-year-old Valentina.

Nowadays, Danielle designs and sells special birthstone jewelry for Moments. And we all know what Kevin Jonas has been up to these days — reuniting with his brothers Nick Jonas and Joe Jonas and putting together their first album in more than five years. The first single from the album is called "Sucker" and they will be debuting it on The Late Late Show With James Corden on Friday night. So I guess we all know what we're doing this weekend, don't we?

Kevin and Danielle Jonas seem to be setting a pretty solid example for relationship goals for the other two Jonas brothers. Which is good news for Nick Jonas and his new wife Priyanka Chopra, and Joe Jonas and his fiance Sophie Turner. I mean sure, they're all adults and will presumably figure out how they want their relationships to look on their own. But isn't it sort of nice to have someone to look up to, especially in the world of celebrity where it can be exponentially more difficult?