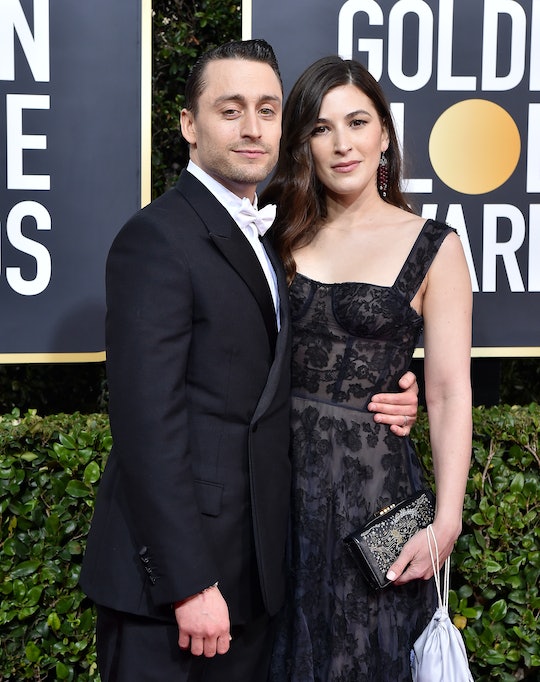 Kieran Culkin Is A Married Dad Of Two

And he’s loving it.

Kieran Culkin has been in the acting business nearly his whole life. His first role was as a baby in the The Good Son (well, he was in a photo at any rate) and of course his famous family has become synonymous with child actors. One of seven children, Culkin grew up surrounded by siblings but now he’s making a name for himself. He’s an Emmy award-nominated actor for his role as Roman Roy in Succession, with his own family. And his life is looking pretty great.

Culkin met his wife, Jazz Charton, at a bar.

Culkin met his future wife, former British model Jazz Charton, when they were both at a bar in New York in 2012. He told Britain’s iNews in 2020 that he spotted his future wife across the bar with another guy but was undeterred. He waited until the other man went to use the bathroom and approached Charton. “I asked if he was her boyfriend and when she said no, I asked if I could be her boyfriend. We’ve been together ever since.”

They got married on a road trip.

Charton and Culkin tied the knot in Iowa on a road trip in 2013, she shared on Instagram (Culkin does not have a social media presence). And it sounds as though it was an impromptu affair, “#tbt to taking time out of our road trip to get married by the side of the road in Iowa during a storm 4 years ago today. Still the best pit stop I've ever made,” Charton captioned a romantic photo from the day, where she walked beside her new husband barefoot in the rain, in 2017.

Their daughter Kinsey arrived in 2019.

The happy couple welcomed their first child, daughter Kinsey Sioux “Zissou,” in August 2019. “Of course our daughter was born on Friday the 13th,” Charton shared on Instagram at the time. “This is me 4 days postpartum - I live in sexy surgical mesh underwear that’s keeping a world of pain in check, my boobs are engorged, I burst blood vessels In my face from pushing, my big pregnant belly that I loved so much deflated to a mere paunch but it’s all so worth it. I’ve never been more in love and we’ve never felt more complete.”

They became parents of two in August 2021.

Culkin and Charton’s youngest child, son Wilder Wolf, was born in August 2021. Not long after his birth, Charton shared a photo of herself with the couple’s two children and the caption, “11 years ago today I left London for NYC for what was supposed to be a 3 month trip… 2 babies deep now so I guess I’m staying.”

Kieran Culkin and Jazz Charton are figuring it out as parents, so much so that he even had some parenting advice to offer brother Macauley Culkin. “The best advice that someone gave me when I became a new parent was don't take anyone's advice, you'll figure it out,” he said, per BabyGaga.

He is a dad of two now, after all. He knows what’s up.