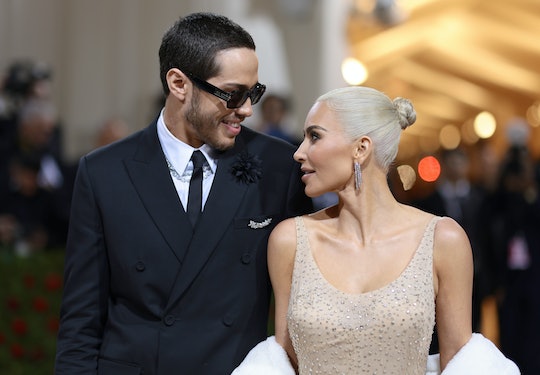 “That was the marker.”

Kim Kardashian has been dating Saturday Night Live alum Pete Davidson for several months now, after she initially texted him and then presumably sparks flew. The Skims mogul has been pretty effusive in her praise of Davidson, calling him the “sweetest, nicest human being” she knows during a confessional on The Kardashians and welcoming him into her big extended family. But when it came to her kids, she was far more cautious. Kardashian waited six months before introducing Davidson to 9-year-old daughter North, 6-year-old son Saint, 4-year-old daughter Chicago, and 3-year-old son Psalm. Because dating as a single mom is a totally different ball game.

Kardashian sat down for an interview on the TODAY show and talked about her romance with Davidson as well as her four kids, who she shares with ex-husband Ye, the rapper formerly known as Kanye West. It seems she waited quite a while before introducing her new man into their lives, even reaching out to her sister Kourtney Kardashian for advice on dating as a mom as well as asking friends and therapists how to navigate this new normal.

“I definitely wanted to wait six months and that was the marker. It’s different for everyone and different things work for different people,” Kardashian shared. “But you just have to do what feels right and try to just be as respectful and cautious as possible.”

The mom of four was first seen publicly with Davidson last October, and the first time he was seen with daughter North driving around in a pink golf cart was in April 2022. So that timeline certainly adds up. And Davidson certainly appears to be taking to Kardashian’s kids in a big way. He’s been spotted out shopping with little Saint several times, and may have even gotten a tattoo on his neck with their initials. He was seen with the letters “KNSCP” on his neck, which seems to point to Kim, North, Saint, Chicago, and Psalm.

While Kardashian and Davidson are still in the early stages of their relationship, it would certainly seem as though they are both doing their best to include her kids in the equation as respectfully as possible. There’s no perfect way to date with kids, but they seem to be trying as hard as they can.