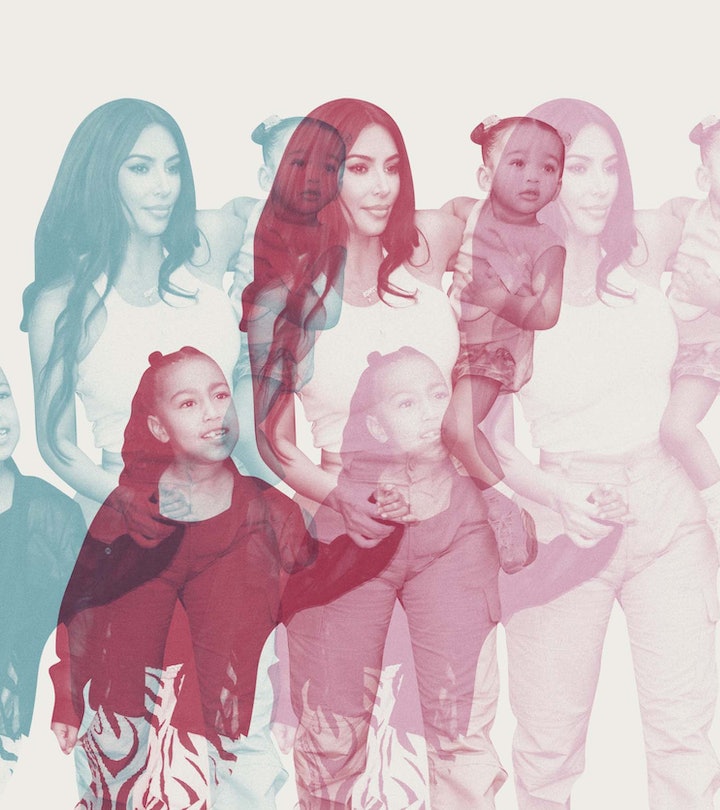 The app is a minefield for tween parents. So yes, we should absolutely be taking lessons from a social media queen.

Tween parenting is a funny thing. You’ve made it through the sleepless early nights and tricky toddler years, but you don’t yet have to worry about your kid reenacting scenes from Euphoria (though you still watch it and take copious notes). Things seem... calm. And then, it happens. You hear a scream and realize your 8-year-old has fallen over while attempting a viral dance challenge.

The time has come: they’ve discovered TikTok. Every tween’s obsession. Most parents’ nightmare.

TikTok is different things to different people: funny, cute, nostalgic, informative, creative, terrifying. For tween parents, it can be a minefield of sensory overload. I find the app almost too much to process. An all-consuming, constant, inescapable churn of content. Unlike the “terrible twos,” the “TikTok tweens” stage of parenting seems to start around age 8 or 9 and lasts for years (I’m speaking to you from year three of the journey). Also unlike the “terrible twos,” Bluey cannot save us here.

With two tweens under my roof, and two younger children who are desperate to do everything their older sibs do, TikTok is one of my bugbears. I’m not alone in this. In fact, I was reminded of the universality of the “TikTok tween” predicament when I saw the latest social media spat in the not-very-amicable Kim Kardashian/Kanye West split.

While some will take this latest fight as further evidence we should vilify Kim and Kanye as symbols of everything that’s wrong with celebrities these days, I have to say, I feel seen.

It’s awful to witness the couple’s acrimonious divorce played out in real time, online, and of course the issues go much deeper than the surface argument about whether or not to allow their 8-year-old daughter North on the social media app. At the same time, I’d wager many parents of tweens will recognize the debate.

In brief: Kanye disapproves of North “being put on TikTok against my will.”

Kim’s response, posted to her Instagram Stories last Friday: "As the parent who is the main provider and caregiver for our children, I am doing my best to protect our daughter while also allowing her to express her creativity in the medium that she wishes with adult supervision — because it brings her happiness.”

While some will take this latest fight as further evidence we should vilify Kim and Kanye as symbols of everything that’s wrong with celebrities these days, I have to say, I feel seen. In fact, I think this is Kim at her most relatable. There’s only been one other time when I’ve furiously nodded along to something in her life, which just so happens to be another TikTok-related episode, when North got in trouble for taking her mom’s phone and going live without permission.

Truth be told, I can see both points of view in the recent Kim/Kanye TikTok argument. I’ve been Kanye in this scenario too (albeit less angry and less public).

My daughter was North’s age, 8, when she came home from school one day talking about Martha Dumptruck and singing “Dang, dang diggity dang,” accompanied by some head thrusting moves and dramatic hand gestures.

“Who taught you about Heathers?” I asked her, impressed. One of my greatest life skills is my obsessive knowledge of musical theater, so I was happy my daughter was getting into it (even though it wasn’t exactly a PG show she was quoting from).

She gave me that sort-of half-scathing, half-pitying look that tween girls excel at.

“Um, what are you talking about? It's not called Heathers, mom. It’s called TikTok,” she responded, turning on her heel and exiting the room, singing.

It wasn’t an auspicious start. From that point on, she started begging, cajoling, pouting, screaming, sobbing, bribing, pleading, and asking for TikTok, like a million times a day. By extension, this meant she now wanted her own phone, another source of tantrums and fights.

It doesn’t really matter whether your child is on it or not, because someone they know is.

The age rating for the TikTok app is 13 (although Common Sense Media suggests it’s more of a 15+ due to privacy and mature content and I would agree), so I assumed this would be an open and shut case of: “No way, but we can discuss it again when you’re 12.”

What I hadn’t appreciated about TikTok is that it doesn’t really matter whether your child is on it or not, because someone they know is. Even without a phone or TikTok account, my daughter was obsessively trying to learn routines, dances, songs. TikTok seemed to be all her friends – aged 8 and 9 – were talking about. Screentime-heavy homeschooling during lockdown made things more extreme. My daughter was so upset during a Zoom call with her two best friends that she left the chat early: they were discussing TikTok challenges and she felt left out.

In an attempt at some sort of compromise, I downloaded the app onto my phone, thinking we could at least watch some videos together. I won’t pretend this quelled my fears. First, I stumbled onto a series of vids called, “And it went like this” (spoiler alert: they all ended in teen pregnancy, although I now realize this is because I watched them so compulsively that the algorithm started feeding me exclusively Teen Mom-type content). Another video of someone working out featured “advice,” which worryingly sounded like eating disorder-speak.

Spending time on the app showed me that, yes, there was a lot of stuff I didn’t want my daughter exposed to yet, but my issue went deeper than TikTok. I was entering totally uncharted parenting territory and it terrified me. Accepting that she would soon be on social media meant that I really was in that next stage of parenting — one that would require me to relinquish a lot more control — whether I was ready for it or not. Twenty five percent of TikTok’s users are tweens and teens, while 63% of Americans between 12 and 17 use TikTok every week. Of course the app mirrors what’s happening in real life for these kids in many ways — and it shocked me that my daughter would soon be one of them. I’d been telling myself that social media isn’t reality, but when you’re a tween or teen in 2022, it kind of is.

My TikTok-obsessed 8-year-old is now a phone-wielding 11-year-old. (For context, in London, where we live, kids switch to secondary/middle school at 11/12, and that shift often involves getting to and from school on their own, so they do tend to get phones then.) Over the past several months, demands for TikTok have become less pervasive and more like background noise, in large part — I suspect — because my daughter is getting to play around with the app on her friends’ accounts, every time they take the school bus to a hockey game or she goes on a playdate. This desire for TikTok is always there, always present, but my daughter has been happy doing things IRL again and hasn’t mentioned it quite so often.

But, she did ask for a TikTok account again in December, as a Christmas present. There were no threats. No tears. Just a simple, hopeful smile. I relented.

We talk — like, really talk — more now that she’s on social media than we did before.

You could say I come from the Kim K school of TikTok usage: my daughter’s account is still on my phone, and she accesses it about once or twice a week, for 30-45 minutes. She scrolls through her friends’ videos, makes comments, sends herself dance routines to learn. Occasionally, she posts videos she’s made: a sushi dinner, a shopping excursion, something featuring her “aesthetic” (think pastel, arty pics of herself half-covered by a blue Instax camera).

I won’t pretend there’s no damaging content on TikTok (there’s plenty, and way too many young children gyrating in crop tops), but what’s surprised me is that there are quite a few positives too. It’s a creative app, and I’m mesmerized by some of the videos these young kids are making. It’s also an active app, encouraging movement and dance.

I’m loath to admit it, but I kind of like TikTok more than I thought I would (top tip: watch all of @tinx’s Rich Mom Starter Packs — so, so good). It’s been an ideal way to start frank discussions on a multitude of difficult topics, from body image to trolls, with my tween. We talk — like, really talk — more now that she’s on social media than we did before.

I’m sure I will find something to hate about TikTok again soon enough, but right now, I love how it’s brought me closer to my daughter, especially since it sparks conversations we likely wouldn’t have in real life. She’ll ask me if I think a video is appropriate, or if I like a certain song. We’ll rock out to Olivia Rodrigo and Taylor Swift and Encanto together.

As all parents know, you can never get too comfortable with something, because as soon as you do, the next challenge is in front of you. I can already see mine ahead: I’m sure my tween won’t be satisfied with using TikTok on my phone forever, and the next battle will begin. But I guess that’s the thing about parenting. You adapt and flex and learn to be open to new challenges and adventures. Even the ones that scare you. You recognize that your children have a lot to teach you (technically speaking, and otherwise).

While I appreciate Kanye thinks he is taking the high road here with a blanket TikTok ban, maybe supervised access to apps like this one (and conversations about what's on there) is what responsible tween parenting looks like in 2022?

At any rate, I’m grateful to Kim and Kanye for bringing up TikTok in such a public light. There are too few conversations about the realities of tween parenting. You read about the many things that aren’t “allowed,” but never see what the murky middle ground of trying to parent a child on the cusp of independence really looks like. Occasionally, that does mean parents arguing, or letting people label you a “bad mom.”

I’m sure North, whose TikTok videos include a range of tween obsessions like slime, kittens, baked goods and her new braces, is in the most capable hands when it comes to social media. After all, is anyone better at knowing how to work it than her mom?