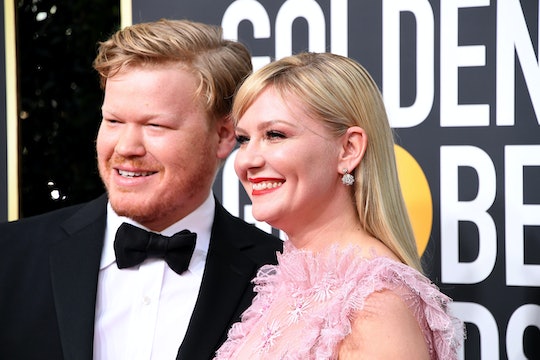 Kirsten Dunst and her fiance, Jesse Plemons, woke up to some Academy Award-winning news on Tuesday morning. The couple is both nominated for Best Actor and Actress in a Supporting Role for their roles in The Power of the Dog.

When Dunst and Plemons learned about the news they were in full parent mode, watching cartoons in bed with the kids. But the news that Plemons was on the list, as well as an overload of excitement, made Dunst tell USA Today all she could do was scream and cry.

“It was like I could release my joy more with Jesse's nomination than my own even, for some reason? I just can't believe that we both got nominated together for the same movie,” Dunst said. “It sounds like an old-fashioned thing that wouldn't happen now, you know what I mean?”

The Interview With The Vampire star added, “Like the Old Hollywood days of ‘Elizabeth Taylor and Richard Burton were nominated...’ It feels amazing to have that as a family and for our families. Everyone is so excited.”

Dunst is among this year’s first-time nominees, which also include Kristen Stewart and Beyonce.

The Spiderman actress, 39, and Plemons, 33, are parents to sons, Ennis, 3, and infant James, who was born last September. The boys were oblivious to their parents’ announcement and were only concerned about one thing.

“I think they freaked out a little bit because they were like, ‘Why is Mommy crying?’” Dunst said.

Wedding plans are on hold because Dunst ‘kept getting pregnant’

Dunst and Plemons met in 2015 and got engaged in 2017. The couple is famously private but it seems plans are in the mix for a wedding. But the baby carriage came first.

“I just kept getting pregnant and I kind of want to enjoy my wedding,” Dunst said on Jimmy Kimmel Live. “I just want to be able to drink and have fun.”

Well, whenever the right time comes, it will be the best one!

The pandemic inspired Dunst to grow her family

If it were not for the covid pandemic, another child may not have been possible. While Dunst and Plemons were filming The Power of the Dog in New Zealand, she decided it was time to expand their family. She told The Times how terrified she was of the pandemic and it sparked her to start thinking about her family life long-term.

“We would go to the grocery store and take off our clothes and wipe down afterwards,” she told The Times. “No one knew anything, it was terrifying. And at the time, I smoked, so I was like, ‘Oh my God, if I get this, I am gonna die.’”

She went on, “I was like, as soon as we are done with this movie, let’s try and have another baby.” A few months later, they were announcing the pregnancy of James!

Their youngest son has a cute nickname

During an appearance on Jimmy Kimmel Live, Dunst shared the family name for her 9-month-old son, James.

“We call him the Big Kahuna,” Dunst said. At the time, the then 7-month-old weighed 22 pounds. But the little guy is active!

“All he wants to do is bounce, walk, be like his brother and walk around,” she said. “He just wants to walk and run, he doesn't even know what crawling is.”

Although the couple does not share images of their sons publicly, you can take their word that family is everything to Dunst and Plemons. During an interview with BUILD Series in August 2019. Dunst shared her reasons for not posting her kids on social media.

“I come from an old school mentality where you don’t want to give too much away because it kind of ruins the mystique of people playing roles. And also, do you really want to see a photo of my kid? I don’t know. What if my kid grows up and they’re like, ‘I hate you mom. Why’d you put me all over Instagram?’ Kids find any reason to hate their parents. Let’s just avoid all of the things you can.”

That same year, she spoke with CBS Watch magazine for her cover story about her role on her show, On Becoming A God, and how her character’s mother survival instincts relate to her own.

“Our situations are obviously completely different,” she told Watch, “but I know what it means to want to protect and care for your baby, and how that comes before anything.”

More Like This
Lyle, Lyle, Crocodile Is Heading To The Big Screen As A Musical Comedy
Kristen Bell Just Hinted That 'Frozen 3' Is Maybe (Hopefully!) In The Works
Chris Pratt Says He "Cried" About That "Healthy Daughter" Instagram Post Controversy
Ben Affleck’s 10-Year-Old Son Samuel Test Drove A Lamborghini Right Into A BMW