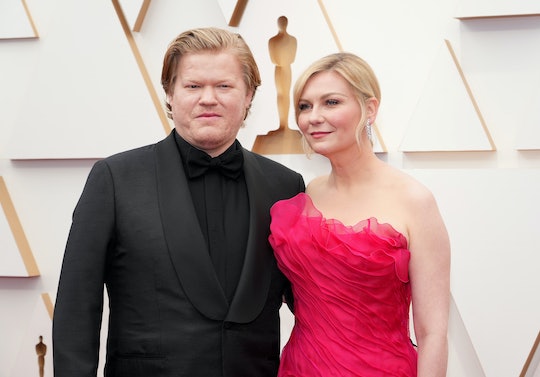 You didn’t expect them to do *nothing,* did you?

In an interview with ABC, Kirsten Dunst revealed her son’s adorable Oscars plans as she and Jesse Plemons hit the red carpet. Because, even when you’re a celebrity, if you want to go out for the evening, you have to make plans for the kiddos. (Celebs: they’re just like us! Only with better date-night outfits and stylists!)

The two are parents to Ennis, 3, and baby James, 6 months, and even though the little ones couldn’t be at the ceremony, they were nevertheless celebrating their parents nominations. “They're in Atlanta right now because that's where I'm working, and they're at a toddler Oscars party,” Dunst told ABC. “So, the girls next door invited them over, and so they're all representing us there.”

Ummm.... a tiny little toddler Oscars party? That sounds adorable. Almost as adorable as a real life couple being nominated for playing a movie couple!

In The Power of the Dog, the two play a husband and wife who marry after a short courtship and find themselves in tense circumstances living with Plemons’ on-screen brother, played by Benedict Cumberbatch. This is the first nomination for both actors, who have been together since 2016 when they met on the set of Fargo, and clearly they revel in one another’s professional success as much, or more, than their own.

“I was actually more, weirdly, excited for Jesse,” Dunst shared after recalling what nomination day was like in their home. “I screamed. To be nominated together is the craziest thing. We just feel so lucky. We already won, you know?”

Chances are the boys will be in bed before the end of the awards ceremony, but we hope that until then they have a great time celebrating mom and dad: the entire family has every reason to be proud!

More Like This
Tia Mowry Reveals Her Easy Hack To Make Driving With Kids A Little Less Stressful
Kate Middleton Explains Why Her Kids Couldn't Attend The Top Gun: Maverick Premiere
'Hocus Pocus 2' Officially Has A Release Date To Look Forward To
Zac Efron Was Asked If He Wants Kids & His Hilarious One-Word Answer Says It All