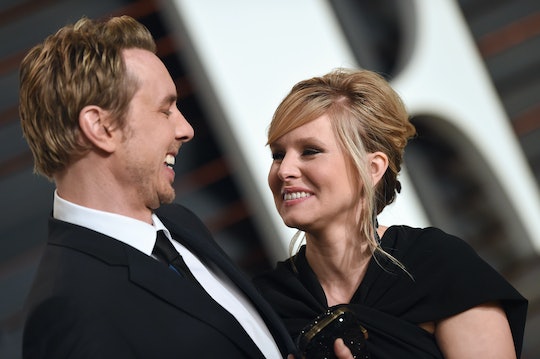 Kristen Bell wished her husband Dax Shepard a very happy birthday in a sweet social media post that celebrated the father of two as both a “stud” and a “dadbeast.” Shepard, who shares two daughters with Bell, turned 47 on Sunday.

“Laughing, snuggling, and growing with you has been more enjoyable than anything I could have ever imagined for my life,” Bell wrote in a message addressed to “the greatest husband and #dadbeast I could ever imagine” and shared over Instagram. “Your patience and commitment with our daughters is only bested by your patience and commitment with the hiccups,” the Frozen star continued, referencing the frustrating 50 hours of hiccups Shepard experienced late last year.

In December, Shepard revealed he’d experienced more than two days of almost constant hiccups that at one point lead to hiccup-induced vomiting. “What a ride,” the podcast host wrote in a Dec. 10 Instagram post. “We have been hiccup free for five days today. For anyone who has permanent hiccups, god bless. I don’t know if I could have gone a week with those without intervening with a cycle of cyanide.”

Bell and Shepard welcomed their first child, 8-year-old daughter Lincoln, in March 2013. Seven months later, the couple married in a low-key ceremony at a Los Angeles courthouse on what Bell has said was “one of my happiest days.” In December 2014, Bell and Shepard welcomed their second child together, 7-year-old daughter Delta. Since then, their relatability and candor about both parenting and marriage have made them one of Hollywood’s most popular couples.

And interestingly, Bell’s recent birthday tribute wasn’t the first time she’s celebrated Shepard as a “dadbeast,” a nickname that effectively highlights the sexual appeal of Shepard being a dad. In fact, Bell has been publicly calling Shepard “the dadbeast” since at least 2016 as evidenced by her older Instagram posts.

Sunday also wasn’t the first time Bell has applauded Shepard’s patience. In a 2017 interview with Family Entourage, Bell said she was “most proud” of Shepard when she sees “the level of patience he has living with three girls. “He does have a ton of patience.”

Bell also praised Shepard’s patience in a Father’s Day post last June, describing him as a partner “who guides me patiently through parenting when I’m fed up and need it most.”

On Sunday, she wished Shepard a happy birthday and shared a handful of photos of Shepard with either their girls or her. “None of us deserve you,” she wrote. “You are singular. Happy birthday, stud.”