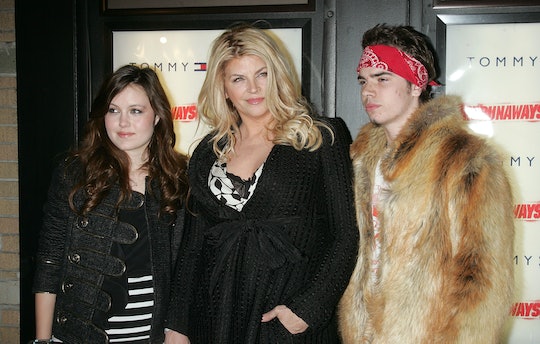 The Look Who’s Talking actress, who passed away at the age of 71, once said her “best quality” was being a “good mother.”

Kirstie Alley has died at the age of 71 years old following a battle with cancer, which had been “only recently discovered,” her family shared in a statement on Monday. The actress was perhaps best known for her roles in Look Who’s Talking, Cheers, and Drop Dead Gorgeous, but it was her role as mom to son William True and daughter Lillie that truly made her proudest.

While Alley’s former co-stars took to social media to offer messages of condolences and memories of working with her, it is, of course, her family who will miss her most of all. Especially her two children, daughter Lillie and son William True Parker.

“We are sad to inform you that our incredible, fierce and loving mother has passed away after a battle with cancer, only recently discovered,” Alley’s children said in a statement shared on her Twitter. “She was surrounded by her closest family and fought with great strength, leaving us with a certainty of her never-ending joy of living and whatever adventures lie ahead, as iconic as she was on screen, she was an even more amazing mother and grandmother.”

Alley herself once told People in 2006 that her “best quality is that I’m a good mother,” and her tribute from her children certainly shows that they agreed.

Alley adopted her son William True Parker, who goes by his middle name, with then-husband Parker Stevenson in 1992. The couple had struggled with fertility issues prior to adopting True including a miscarriage in 1990, something Alley wrote about in her 2005 book. “I had just been told it was very possible I would never be able to have children,” she wrote at the time, according to an excerpt shared by People.

While Stevenson and Alley divorced in 1997, they remained dedicated co-parents to their children. So much so that Stevenson shared a beautiful tribute to her after her death on Instagram, writing: “Dear Kirstie, I am so grateful for our years together, and for the two incredibly beautiful children and now grandchildren that we have. You will be missed.”

Her son True got engaged to his high school sweetheart at 17.

True grew up very much away from the spotlight despite having two famous parents. In fact, he very much forged his own path when he got engaged to his high school sweetheart in 2010, something his mom wasn’t worried about. “I feel good because they're really in love,” Alley told Ellen DeGeneres at the time. “True's got a level head. He's a good guy. He's very monogamous and he's very sweet with her.”

True made Alley a grandmother in 2016.

In 2016, Alley became a grandmother when her son True welcomed son Waylon Tripp Parker. She spoke to People about watching her child become a father, calling True an “amazing” dad who is really hands-on with his son. “It's heartwarming to see your own child have a child,” she said at the time. “... I always knew my son would be because he loves babies, he's always loved little kids, they've always gotten along really well with him.”

She adopted her daughter Lillie in 1994.

Alley and Stevenson adopted daughter Lillie in 1994, and much like her older brother True, she was kept out of the spotlight. When she wasn’t joining her mom on the red carpet as her date every once in a while, that is. Also like her older brother True, Lillie found love at a young age, at 16 with boyfriend Nick Trela. Sadly, Trela was killed in a motorcycle accident in 2014, and Alley’s close friends John Travolta and Kelly Preston went to the funeral to support the whole family.

Lillie welcomed her first child in 2021.

Lillie eventually went on to find happiness, marrying boyfriend Chaffee Burkhart Graham in 2017. And in May 2021, she made Alley a grandmother again when she welcomed baby boy Ripp Woodrow. She shared her joy on Instagram when Ripp was born with a message reading, “You are perfect. Thank you for making me a mother.”

Alley’s kids were everything to her.

While her career was clearly important to her, for Kirstie Alley it all came back to her kids. “Kirstie always has her kids with her,” Kathy Najimy told Good Housekeeping in 2007 about the kind of mother she saw in her friend. “And she’s the kind of mom you want because she’s really fun. Last time we were over, [Kirstie] jumped into the pool with her clothes on. … Instead of buying Lillie a dollhouse, she’ll build a dollhouse that’s big enough for three people. She doesn’t spoil her kids, she just does things in a grand way.”

What a lovely legacy to leave behind.