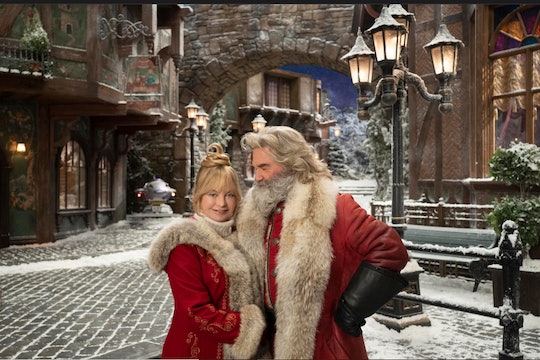 Is there a better couple on the planet that Kurt Russell and Goldie Hawn? What better example do we have of a couple who admire and respect each other as individuals, who exemplify love and cooperation? Really just Santa Claus and Mrs. Claus. So it stands to reason that Russell and Hawn play them in The Christmas Chronicles 2, which is set to be released in 2020.

Russell became a Santa Claus with a different look in the 2018 Netflix hit The Christmas Chronicles. He was not exactly like the "jolly old elf" kids around the world were told about in the storybook 'Twas The Night Before Christmas. And just as Santa Claus had a more modern look in The Christmas Chronicles, when his wife was revealed at the very end of the film, she didn't look like the sweet old lady some of us always pictured either.

Russell's real life partner, Hawn, showed up in a brief cameo for the end of the film as Mrs. Claus, and it was obviously such a hit that the couple are reprising their roles for round two.

Netflix announced on Friday that the sequel will be directed by Home Alone director Chris Columbus and will see other stars of The Christmas Chronicles reprising their roles. Darby Camp will come back as Kate Pierce, who has turned into a cynical teenager, Kimberly Williams Paisley as her mom Claire, and Judah Lewis as her brother Teddy.

This time around, Kate teams up with Santa again to fight off a new threat to Christmas, a magical troublemaker named Belsnickel, played by Julian Dennison. Belsnickel is basically described as Santa's cranky cousin, so that should be interesting. You might remember when Dwight Schrute dressed as Belsnickel for Halloween on The Office — I suspect Belsnickel will be no match for Kurt Russell's cool cat Santa Claus though.

Columbus, the director of The Christmas Chronicles 2, told People that working with Russell and Hawn has been a load of fun for him. "There’s a tremendous amount of respect there and a tremendous amount of love and trust, partially because they’ve been together for so long," he told the magazine. "They just get along beautifully."

Fans will get to see the couple in action for the holiday season in 2020, so get ready to fall back in love with the best couple in the world. Kurt Russell and Goldie Hawn as Santa and Mrs. Claus. Match made in heaven.