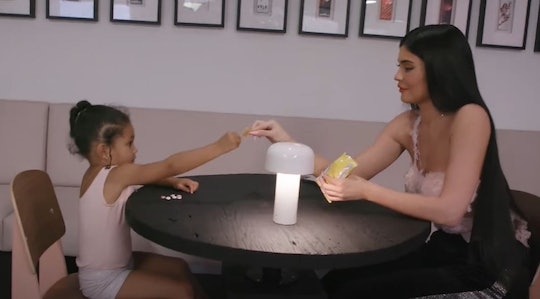 “She has her own office where she gets all her business done.”

Stormi Webster is still a toddler but her mother is already getting her set up to be a boss. According to Kylie Jenner, her 3-year-old daughter has office space inside Kylie Cosmetics and Kylie Skin, and she and Stormi are apparently working on a new “secret” brand together.

In a two-part YouTube series posted Monday on Jenner’s channel, fans got a peek inside the beauty mogul’s headquarters, plus a glimpse at where the youngest, up-and-coming entrepreneur does her business.

“Is there where you get to hang out? Is this where you come to work,” the cameraman asks Stormi off-screen. “Yes, I work here and I work here,” she responds, sitting in her pink toddler chair. Around her are dolls and other toys. It looks like your typical playroom, but mom says that’s her office!

“She has her own office where she gets all her business done,” Jenner, 23, says. “She is actually launching a little secret brand soon that we have been working on for a while.”

Stormi’s grandmother, Kris Jenner, who is also in the video, says Stormi goes to work with her mother and says she “just loves it and absolves it.” Jenner credits her mother and sisters — Kim, Khloe, and Kourtney — on being huge influences in her life and shaping her into the woman she is today. Within that tribe, Stormi has plenty of empowering role models who will support and encourage her to do whatever she wants. “Stormi has such strong women and men in her life, but she has a lot of strong women to look up to,” Jenner says.

While Jenner has not shared what this “secret brand” is, this is not the first time the two will be working on a project together. Back in 2020, the pair collaborated on an eyeshadow, blush, and lipgloss set called the Kylie Cosmetics Stormi palette. “I asked her what colors she would wanna do, she loves purple,” Jenner recalls in the YouTube video. “She liked butterflies at the time, so just things that she was into.”

Again, mom and daughter are pretty hush-hush about their new venture, but employees at Kylie Cosmetics have accepted they will likely be working for Stormi one day. “What a great legacy she’s leaving to her daughter,” chief commercial officer, Megan Mildrew shares in the YouTube series. “One day we’ll all be working for Stormi too probably.”

After all, Jenner has already expressed her desire to hand over her multi-million dollar company to her one day when she is older. “Stormi is my legacy,” Jenner told tmrw Magazine in their May 2021 edition. “I'm raising her to be smart and kind and driven. Maybe she will take over Kylie Cosmetics one day. Only if she wants to.”