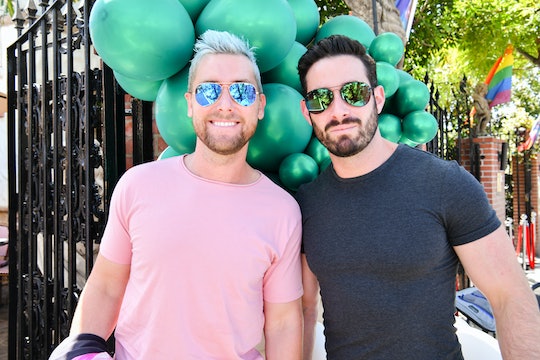 Lance Bass & Husband Michael Turchin Are Going To Be Dads

Lance Bass and his husband Michael Turchin kicked off Pride Month with some exciting baby news — the NSYNC alum and his other half are about to become fathers of two! That’s right, they’re expecting twins, boy-girl twins this November. The couple officially revealed their happy news this week with a hilarious and creative video designed as a horror movie trailer on Bass’ TikTok account.

On Monday, Bass shared in an interview with People that their road to fatherhood has been “quite the journey,” revealing that their surrogate had suffered a miscarriage last year. As a result of those experiences, the couple decided to keep their news private of their twins on the way private. “Because of what we've been through the last four years, we were very cautious to get excited. And it kind of sucks because when you find out you're pregnant, you want to celebrate with your family,” Bass, 42, told People. “You start planning their future in your head already, but we were so scared because we didn't want to go through the pain again of losing them.”

Last year, Bass told Good Morning America that if they went through another miscarriage, he and Turchin were open to adoption. “There are plenty of kids who need adopting,” Bass told Good Morning America in March 2020. “So, I'm not opposed to going right ahead and adopting if this fails next time.” Fast forward more than a year later and two little ones are on the way!

Bass and Turchin, who have been married since 2014, told People they wanted to aim for twins since Turchin is a boy/girl twin himself. What’s more, Turchin told People that he fertilized one half and Bass fertilized the other half and “they all turned out great.”

Although the babies are not expected to arrive until November, the couple hopes they’ll come sooner and make a treat-or-treat arrival. Their announcement video on TikTok was staged like a horror movie with a mix of classic flicks such as Halloween, Poltergeist, and Stephen King’s The Shining. In it, Bass and Turchin are distracted by strange sounds coming from a room and believe it’s a ghost, so they contact a paranormal expert. It turns out, the otherworldly presence is their incoming twins! “Michael, look,” Bass says to his husband while looking in the oven. “Awww!” they both say with smiles on their face.

“Two buns in the oven,” text on the video reads. “Coming soon.”

We can see it now: Two cute pumpkins!