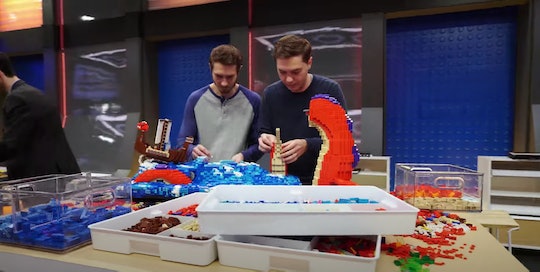 Everything You Need To Know About LEGO Masters Season 2

Tell your kids: the incredible LEGO building reality show is back!

If you’ve ever thought LEGO building should be a competitive sport, then LEGO Masters is the show for you. The high stakes, competitive reality show pits teams against each other to create some incredible masterpieces, all out of the little plastic bricks. Season 2 is currently airing on FOX right now, so here’s everything you need to know.

In each episode of LEGO Masters, which is based on the United Kingdom reality show with the same name, 12 teams of two LEGO enthusiasts are given an unlimited supply of LEGO bricks and challenged with building fantastic creations within certain design and time constraints. The show’s host, Will Arnett, who also happens to be the voice of LEGO Batman, and other guests judge each creation. But only one team will win the title of LEGO Master, the grand prize of $100,000, and have their winning creation on display at LEGOLAND Florida.

The aspiring builders, creators, and engineers in your family will be obsessed with this show if they aren’t already.

You can watch brand new episodes of LEGO Masters when they air every Monday on FOX at 8 p.m. EST. The show is now two episodes into the second season, so it won’t take you too long to catch up on the old episodes.

Catch Up On Hulu

If you don’t have time to watch it when it airs on FOX, you can watch episodes of LEGO Masters on Hulu, after they air on TV. Not only does Hulu have the episodes from this current season, but it also has every single episode from Season 1, so you can catch up on any of the episodes that you might have missed. A basic Hulu subscription starts at $5.99 a month.

You can also find episodes on FOX’s website after they air on TV, but you will need a log in to a cable subscription to watch them.

The first season of LEGO Masters debuted at the start of 2020, and the husband and wife team of Tyler and Amy were crowned the winners during the finale, which aired in April of last year. The show must have been popular among viewers, because it got renewed for a second season in November.

Season 1 is streaming on Hulu now and can serve as great inspiration for the little LEGO masters in your family.