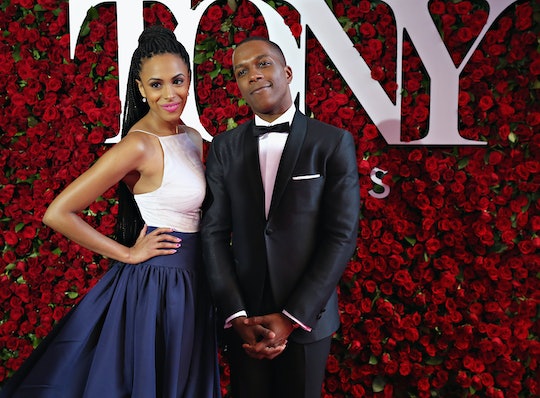 The Hamilton star has "lots of reasons to celebrate."

Sounds like the Odom family's adorable trio will soon become a beautiful quartet. On Monday, Hamilton star Leslie Odom Jr. announced he's expecting his second child, a baby boy, with wife Nicolette Robinson and they're all celebrating the happy news.

"Lots of reasons to celebrate over here. Lots of reasons for hope too," the dad-to-be wrote on Instagram in a post shared on Nov. 9. "Baby boy and mama are doing swell. Praying for him and all the little ones on the way!"

"The new class!! We’ll make it right for you," Odom, who starred as Aaron Burr in the Broadway musical, added, using a quote from Hamilton's "Dear Theodosia" song.

The couple, who welcomed their 3-year-old daughter named Lucille in April 2017, announced the exciting news with a few cute snapshots that showed off Robinson's growing belly. Robinson also posted the news on her social media and shared that their baby boy's expected arrival date is in March 2021.

"Sweet baby boy, we cannot wait to meet you," she captioned the photos on her Instagram. "More reasons to love, to live, to connect, to pave the way for you and other little ones arriving in this world...We love you. Arriving March 2021."

Odom revealed on his Instagram Story that they already have a name picked out for their baby on the way, but are not revealing it to the public yet. "We only refer to him by his name here (privately)," he said on his Instagram Story. "We're really excited. Thank you for all of the positivity and love, the outpouring of love today. We've seen it and we really appreciate it."

Beyond their exciting family news, Odom and Robinson recently filmed and executive produced an episode of Freeform's Love in the Time of Corona together back in August. Robinson is set to star in her first movie role, One Night In Miami, which premieres on Christmas Day and streams on Amazon Prime starting on Jan.15.

When he is not prepping for his new baby, the Tony and Grammy Award-winning actor is promoting his new Christmas album. The Christmas Album is already number two on the iTunes list since its release last Friday (Nov. 6) and is available on Spotify, Apple Music, Amazon, YouTube, Soundcloud, Pandora, and Deezer. Perhaps some Christmas-themed pregnancy photos will grace our feeds over the next few weeks.