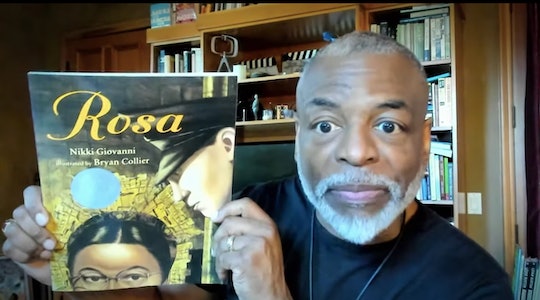 “Read the books they don't want you to — that's where the good stuff is.”

Banned or not, LeVar Burton wants to make sure kids are still reading their books. During an appearance on The Daily Show With Trevor Noah on Tuesday, the former Reading Rainbow host did a relevant skit as he attempted to read children’s books to his viewers. But every book he chooses has been banned in school districts or libraries across the country.

The first book he attempts to read is a picture book called Rosa by poet, activist, and educator Nikki Giovanni, which is written as a tribute to Rosa Parks and her legacy. “So, as it turns out that book is banned because reading about segregation is divisive,” Burton says.

He then went on to read another children’s book, 2005’s And Tango Makes Three by Peter Parnell and Justin Richardson, which the American Library Association notes was most challenged book by parents for three consecutive years. “It's about two penguins and their little baby,” he explains. “Both penguins are boys. Well, I'm told that that book is also banned because of sexual perversion which is weird because there's no sex in the book at all. Y'all, they adopted the baby.”

His final attempt was Dr. Seuss’ Hop on Pop, which is apparently considered “disrespectful to parents.” In 2014, a committee for the Toronto Public Library requested that the 1963 children’s book be banned for “encourag[ing] children to use violence against their fathers.”

Expressing some of his frustration, Burton implored viewers and kids to keep reading. “Read the books they don't want you to — that's where the good stuff is. Read banned books!”

As of 2022, at least 50 books have been banned in the state of Texas, according to NBC News. Bills such as the anti–critical race theory and censorship are constantly pushing the narrative as more politicians call for certain books to be challenged in the classroom. The New York Times reports books about race and racial identity are at the top of the list. The American Library Association has tracked hundreds of book challenges across the country,

During Tuesday’s episode of The Daily Show, Noah called the book banning a “new culture war.”

More Like This
From One Black Father To Another, This Is What Our Sons Really Need From Us
Janet Jackson's Son Eissa Is A Little Musical Prodigy In The Making
Ciara’s Kids Make The Sweetest Cameo In Her New Song “Treat”
Barack Obama Says He’s His "Family's Designated Photographer" & Dads Can Relate