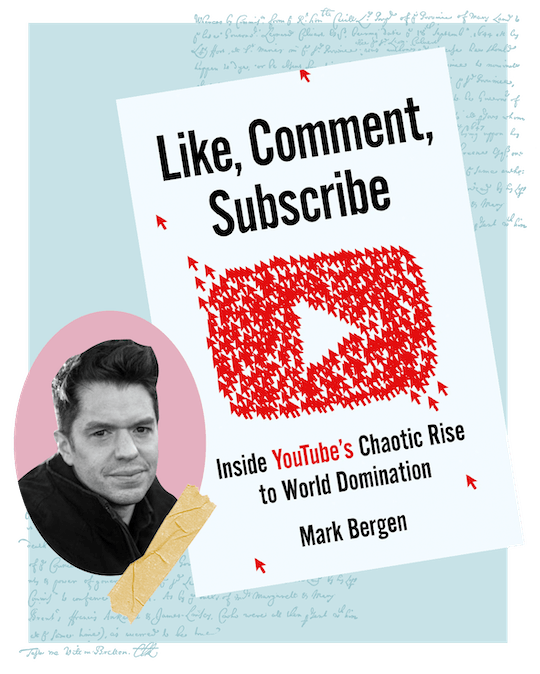 If you’re awake and on the internet in America, you’ve probably watched a YouTube video in the past week, if not the past hour. Whether or not we’re aware of it, YouTube is an integral and intimate part of our everyday lives. Just this morning, I watched a YouTube clip of the “Try Guys” SNL sketch after it was linked from a medium-funny tweet. Yesterday, it was a video of Lady Gaga singing at the 2020 inauguration (my daughter decided to dress up as this historic moment for Halloween and I needed a visual reference for a paper mache gold dove).

But how much do we know about the company that houses both our favorite Daniel Tiger clips and the home repair tutorials and the videos that teach us how to braid our children’s hair? Who decides what appears in our recommendation lists or which ads bookend our entertainment?

Journalist Mark Bergen attempts to answer these questions with his new book on YouTube’s history, Like, Comment, Subscribe. Bergen suggests that the average YouTube viewer would do well to better understand the platform, which has evolved from a video-sharing website to what Bergen calls a “utility” – something we rely on to get through our day. What Bergen offers us is a comprehensive and thoroughly reported investigation into YouTube from its earliest beginnings into its possible futures. Included in this history is the company’s approach to one of its largest categories of videos, kids’ content—both the licensed kind and the much more free-range varietal, which has caused the company legal, financial, and regulatory headaches over the years. Bergen spoke to Romper from his home in the Bay Area, not far from YouTube’s global headquarters in San Bruno, California.

The subtitle of the book is “inside YouTube’s chaotic rise to world domination” and you discuss a lot of back and forth in the company’s early days. I was surprised to learn that YouTube started as something between a dating video app and Flickr.

So much of the early internet—like Facebook and YouTube—was inspired by [the defunct photo-rating website] Hot or Not.

The thing that's interesting about YouTube is that so much of the types of videos that are made are outside the company's control, and the company’s history is YouTube responding to them—from benign stuff like ASMR and mukbang, to much more troubling things. The pixels that you see in your feed are really shaped by a lot of decisions that both the company and the creators make.

The most fascinating cases were in kids’ content. One example from the book is “Finger Family,” a really popular trend that started off with an animated nursery rhyme with a set of five family members—Daddy, Mommy, boy, girl, baby. All of a sudden the algorithms are rewarding that and people are watching it more and more. Then you see creators start to produce their own “Finger Family” videos—sometimes not even animation, but they actually dress up in live action. A lot of these trends totally got out of control. Internally they call it “replica” when there are a bunch of channels to start to imitate. They're like moths drawn to a light.

YouTube is such a giant in the video world and it seems like many trends around video have started on the platform. What makes it special?

It was able to break away from the pack early on for a few reasons. One is because it's pretty easy to use. And they solved the copyright problem fairly early on with a system called Content ID that automatically detects copyrighted footage. 2007 is when they started paying creators, although it wasn't that widespread until 2012. But that was something that set it apart too, because Google had the largest ability to pay people.

YouTube is the world’s biggest music service which is another thing. And the most popular videos by traffic on YouTube are made for young kids. That's something that doesn't exist on TikTok. TikTok’s not in India because it's banned—and there lies YouTube's biggest market. There are places around the world where YouTube is like the primary television screen. And YouTube is advancing on TVs in the US. There's just something remarkable about its scale.

At the very beginning of YouTube’s history there was no content moderation. And then they asked one early employee to start reviewing videos. Over the years, they’ve expanded their content moderation, which is better for users, but it’s been a rocky road.

Their growth got way ahead of their abilities in content moderation. In late 2017, they started to hire thousands of people—mostly contract workers—which transformed YouTube into this mega city overnight. To keep using that metaphor, they didn't have a “police force” or a “sewer system,” or all this infrastructure. Now, they do have those systems in place that didn't exist before. YouTube has more leverage than other platforms. It can demonetize channels, it can remove videos from recommendations. That’s a powerful monetization tool too. It's not just the binary of “it’s live on YouTube” or not. It's much more stable, but there are always going to be debates around the subjective areas—misinformation, hate speech, harassment. They're increasingly facing demands from governments to remove content, under the guise of extremism, or misinformation that critics will say is just trying to take down opposition.

I think YouTube has changed a lot. Maybe 10 years ago, it was much more like, “we're going to defend videos and keep them up at all costs.” And now, because the company has changed, leadership has changed, and it's being regulated—and threatened to be more regulated—the company is much more willing to cave.

The one place in the US where DC has cracked down on Big Tech is with the Federal Trade Commission fining YouTube for violating the Children's Online Privacy Protection Act (COPPA) in 2018. YouTube changed dramatically since then. Every video posted has to be marked either “made for kids” or not. If it’s “made for kids,” it can't serve certain types of ads or have comments.

Even with protections like that, as someone who worked in tech for a while, I don't always feel comfortable with my kid using a lot of technology; I think I know too much about how the sausage is made.

I don't think you're alone in that.

I found the “Elsagate” example from around 2017 particularly disturbing: When Frozen content was getting a lot of engagement on YouTube, some creators started pumping out videos featuring those characters. But the videos they made had nothing to do with the movie or the franchise, and in some cases the narratives were wholly inappropriate for kids.

I'm always doing searches on YouTube for the things that my kid likes, with her right next to me. So it's quite scary to imagine all these creators latching onto a keyword, and then creating very inappropriate content that would potentially appear in a child’s search.

That term was from when YouTube made a pretty dramatic response and removed a lot of those channels. But [the videos] were Spiderman and Elsa mashed together that did really well. Part of the reason was there was a void: Disney doesn’t put their prize IP on YouTube, and so much really popular kids content doesn't appear there. Some of [the videos that pop up] are really delightful like fanfiction—creators sort of like riffing off of their favorite characters or movies. That's been part of YouTube since day one. But that’s mixed in with really irresponsible pranking. And then this content mill can pick up on it, favoring output quantity and cheapness over responsibility and quality.

Yeah. How have the people you’ve talked to for this book felt about content and content moderation when the rubber hits the road of their own families?

For a long time, YouTube had this blindness, like “we're a site for 13 and older.” And certainly for the first five years, there wasn't a lot of kids content. It really wasn't until like 2012 or so that it started to explode. I think there is a sense inside leadership that YouTube is educational. Internally, they had all these debates about whether or not to curate videos for YouTube Kids, the app. One of the reasons why they decided not to do that is because of videos of trains leaving the station or airplanes taking off, which kids are fascinated with. They felt like, this is not something we would normally categorize as kids’ videos, and we don’t want to restrict the bounty that is YouTube.

I think [YouTube’s CEO] Susan Wojcicki would say that she lets her kids watch YouTube. But the book is partially a call to pay attention to this thing. There are really good researchers out there who study this, but they're not many of them and it's a hard topic to study. It's kind of raising an entire generation of children and we don't really know what the consequences are.