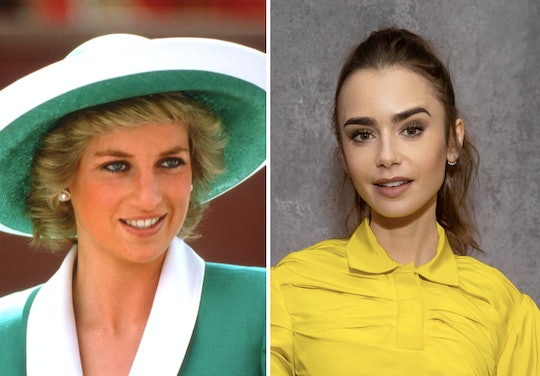 “I guess I had a tendency to do naughty things as a 2-year-old.”

When Lily Collins was just a sweet little toddler, she met not just one but two members of the royal family. She is the daughter of famed musician Phil Collins, after all, and apparently being his kid comes with some serious perks. Not that she seemed terribly excited about it as a little girl from the story she shared on The Late, Late Show with James Corden. The Emily In Paris star was decidedly blasé about the whole royal thing. So much so that she caused a bit of a faux pas, in fact.

Corden showed Collins an adorable photo of the moment she met Princess Diana, where the late Princess of Wales is smiling down at Collins. The actress explained what was happening in the photo as it was explained to her since she was too little to remember.

“I’ve been told this is what happened,” she shared. “That’s my mom and dad and I at a Prince's Trust event and I’m giving Diana flowers. But the second that she went to take them, I then tried to pull them back. So as you can imagine, all the air was sucked out of the room.”

To be fair, Princess Diana doesn’t look the least bothered in the photo. Collins thought she knew why. “I was wearing a cute dress,” she said, “so who’s gonna really punish me there?”

Princess Diana wasn’t the only royal to have a small skirmish with Collins as a toddler. She also had a moment with the future King of England, Prince Charles. “I was also told that when I was younger, I was playing with some toys with Prince Charles,” Collins told Corden. “And I proceeded to kind of throw something at him, like throw a toy telephone at his head, which again, all the air was sucked out of the room.”

It sounds as though Lily Collins got more time with the royal family than most, and she had an explanation for that, “My dad did a lot of stuff for the Prince's Trust and I grew up in England. I just went along for the ride and I guess I had a tendency to do naughty things as a 2-year-old.”

Phil Collins did indeed do some work for the charitable organization the Princes’s Trust through the ‘80s, and even struggled with his own awkward situation with Princess Diana once. In his memoir Not Dead Yet, he shared a story about running into Princess Diana as she was being driven around London and she blithely told him, “I've just had a colonoscopy. It was great. You should try it,” per Vanity Fair.

A down to Earth princess for sure. I can’t imagine she was too concerned about a toddler trying to take back a bouquet of flowers.