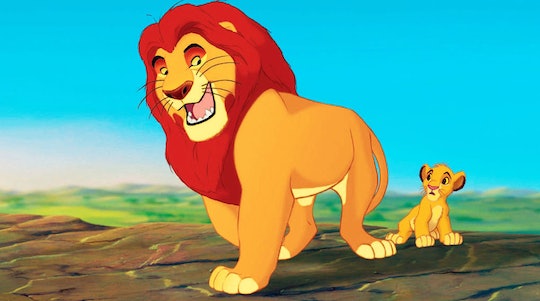 Take a seat and grab a comforting cup of tea because Mufasa's story just got sadder...

Disney fans, listen up. The following announcement may leaving you feeling shocked and perhaps with more tears for one of our favorite childhood movies. Truly, a new Lion King theory about Mufasa's death and Scar that's gone viral on TikTok will make you question everything.

Even 27 years later, Mufasa's death in The Lion King is a doozy. Who could forget the tragic look in Mufasa's eyes, portrayed by the iconic James Earl Jones, when he begs for Scar, voiced to perfection by Jeremy Irons, to help him as he clung to a ledge. Instead of showing mercy, Scar tosses his older brother to his death into a stampede below.

Now, it was largely assumed that Mufasa's body was left to decay at the bottom of the gorge after Scar and the hyenas chase off Simba. But now, a new theory suggests that — wait for it — Scar ate Mufasa and kept his skull as a souvenir.

According to a riveting investigation by TikTok user Christian Jones, hyenas do not usually eat lions. As LiveScience explains, hyenas often "take advantage of other animals' kills for easy meals" and will eat everything, including "bones and hooves," though they do hunt plenty of animals, like fish, snakes, birds, and even hippos. It's hard to know for sure if the hyenas would feast on Mufasa since he had already perished.

What's more, as Jones pointed out, lions have no natural predators. Lions are one of Africa's apex predators and exist "at the very top of the food chain," according to Dictionary.com, meaning they are not preyed upon. But as Jones dove into on his TikTok video, the only predator that would kill a lion is one of their own. Lions typically hunt bigger animals like buffalo, giraffe, zebra and wildebeest, but the BBC reported that there have been cases of lions killing other lions. Whether or not they would eat them is another story.

Jones argues his theory further when he points out the scene when Scar forces Zazu to sing "I've Got A Lovely Bunch of Coconuts" while he sings along, holding an animal skull. A quick Google search by Jones (or anyone for that matter) shows that the skull Scar is holding looks eerily similar to a lion's skull.

This new, dark theory adds to an ever-growing list of maybes, what-ifs, and some totally off-the-wall fan theories about the 1994 iconic movie, starting with its origins. In a 2011 interview with Blu-Ray, the creators admitted the movie has similar themes and relationships to Shakespeare's Hamlet. "Everyone responded favorably to the idea that we were doing something Shakespearean, so we continued to look for ways to model our film on that all-time classic," Rob Minkoff, the co-director of the film, told Blu-Ray.

Whether you believe it or not, it's hard now to unsee. The theory makes the scene when Mufasa's ghost appears in the clouds before adult Simba even more emotional. And Mufasa's death scene is now even more grim. Nonetheless, '90s kids can find solace in knowing all was not lost — Mufasa's legacy lived on through Simba as king of Pride Rock. So, the Circle of Life continued after all.