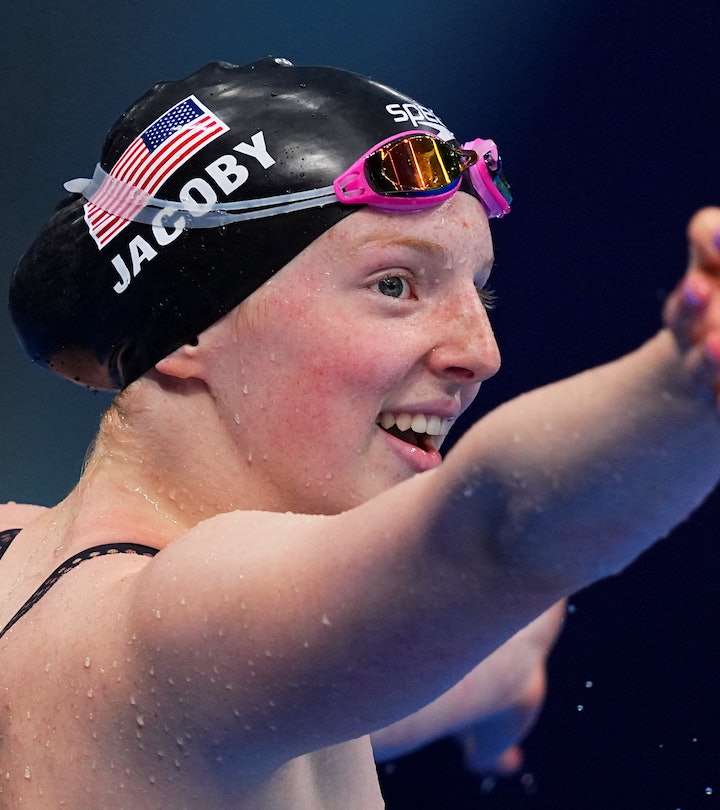 And her mom filmed it on her iPad.

When high school senior Lydia Jacoby won her first gold medal in the 100 meter breaststroke at the Tokyo Olympics, it was a big deal. These were her very first Olympic games, and she managed to defeat her teammate and record holder Lilly King. This is a once-in-a-lifetime moment, one that the 17-year-old from Alaska had worked towards for years. One of those moments a person wishes they could film but they are too busy living it. Fortunately in this case, her mom had her covered. At the very moment Jacoby won Olympic gold (wearing her pink childhood goggles), her mom was filming it on her iPad. And it was honestly one of the sweetest, most relatable moments from the Olympics so far.

Jacoby’s mom Leslie has been supporting her daughter’s dream to make it to the Olympics since Lydia first started swimming competitively at the age of six at the swim club in her hometown of Seward, Alaska. Leslie and Rich Jacoby were initially only interested in ensuring she was safe in the water as they are both licensed boat captains but Lydia thrived in the water. “I just kept doing it, all my friends did it with me, it was just a fun thing," she explained in a press conference, per People. “Then, when I was about 12, I broke my first state record. And that was kind of when I realized that it was something that I excelled at.”

In 2018, Lydia qualified for the 2020 Tokyo Olympics and she and her mom rented an apartment in Anchorage so that she could train for two years. Uprooting themselves during a pandemic and everything.

On Tuesday, all of that training paid off. And Leslie Jacoby made sure to record the culmination of her daughter’s dream in the way of all moms in the 21st century. On her iPad. All the way from an Olympic watch party in Orlando, Florida as family members were unable to join athletes in Tokyo due to the pandemic.

Leslie Jacoby recording her daughter on her iPad has become a favorite moment for many on social media. “The most swim mom thing I’ve ever seen is Lydia Jacoby’s mom filming her gold medal Olympic swim on an iPad,” wrote one, while another noted, “I know Lydia Jacoby just won an Olympic gold medal but the real hero is her mom w the iPad out getting the shot.”

There will be some people who criticize Leslie Jacoby for filming the moment instead of simply watching. But parents get what she was all about. She was saving a precious moment for her daughter. Giving her the gift of being able to watch it herself. Giving up her own moment to honor her kid. That’s parenting. From behind an iPad.